Dawn Parkes lives in The Chilterns and has run her own business for the last 18 years. She is MD of her commercial cleaning company which employs between 80 – 100 people at any one time across 34 locations, and she works from her office in High Wycombe.  She has fostered abandoned rabbits since 2000 for a local group. Last week she bought a ukulele and hopes to master a few tunes as her winter project....!

Dawn’s daily schedule can sometimes be punishing trying to fit everything in. She says - “My days are long! I have a great team at the office and I need to be organised and have bags of energy to make everything happen and happen properly - be that business or the care of my animals.  I have never played a musical instrument in my life, well apart from the triangle in the school band once! So I am looking forward to at least attempting to play the ukulele, but we shall see.

She is passionate about defending animals and shares her life with her cats, horses and foster rabbits.  Here she explains how she went from '80's yuppie to animal advocate.

And you've guessed it, I'm not talking about the lovable cartoon characters but two beautiful tabby kittens that came to live with me and shared my home for 19 years.

The statement ‘changed my life forever’ is massive, but the impact they had on me was monumental and I wasn't expecting it. I was a career girl with my own business, one of the original yuppies in the late 80’s with the big mobile phone and fast car.

I’d never been brought up with animals, we weren't allowed them – they make too much mess with their fur we were told. So I shocked myself when a lady I barely knew called me at the office 3 weeks in a row asking me if I wanted one of her kittens, her cat wasn't spayed and had got pregnant. My reply was always the same, no I don't want one of your kittens why would I? By week 3 she said she was going to advertise them in the paper - free to good home, I still refused. I put the phone down and started to worry about what sort of home they would go to. The next thing I knew I was stood on her doorstep and when she opened the door she said ‘I knew you would come’ at this point I still protested and told her I only wanted to see them before they left. In the room was Mum and 7 Kittens that were scampering around having a lovely time. They were all independent from each other apart from 2 that never left each other's side, where one went to explore the other did. “How can you part them” I said as I put my hands down and they both climbed into the palms of my hands and fell asleep on my lap. At that point, I was smitten and there was no turning back, I'll have both I said, I couldn't bear for them to be parted.

That was the exact moment in time that formed the person I am today and changed my life forever. Thank you, Tom & Jerry for all you have given me and all you have made me.

For me when I think of the questions what makes us compassionate and why people live compassionate lives, I believe it is when you have a connection with an animal, right into your core, your very being, and it's hard to describe it but it's not a sentimental 'oh aren't they cute give them a stroke' kind of connection it’s far deeper than that. It challenged me to question and look at things differently and I can pinpoint pivotal moments on my journey after this first one.

A fundamental difference in my attitude towards animals came about when I felt we shouldn't eat them nor did I want to and 19 years ago I become a vegan. Don't get me wrong it didn't happen the day I came home with my kittens, all the changes in my life were gradual as I became enlightened and aware. It was as if my conscience had really kicked into touch with the good, the bad and the damn right ugly of life. It was a gradual awakening and one which I am grateful for.

It started with me seeing an advert in the paper with the picture of a calf going to live export for veal, the caption was - 'If you think this is wrong do something about it'. I will never forget the look of fear in the eyes of the calf and it really upset me. I filled in the coupon with a cheque and sent it to the organisation which was Compassion in World Farming.

I received some information a while later, and then I just seemed to learn more and more about the injustices going on all around me. I wanted to help and became involved in any way I could – joining demonstrations, educating, speaking, and letter writing. I had an overwhelming desire to speak up for these voiceless, innocent animals. Defending these animals put a fire in my belly and passion in my heart that nothing else ever has or I'm sure ever will...

So I guess this is the difference between how I was and how I became. I always thought I was a compassionate person but before my awakening, I may have just thought – this is awful it shouldn't happen and then go about my business.

Instead, I was angry and chose to do something about it, and threw myself into trying to make a difference. I wanted for all animals, whatever the species, to have a voice. So over the past 19 years, I've been involved in a number of campaigns both here and in The Czech Republic.

I've also shared my home and adopted a whole range of various cats, dogs, horses, rabbits and rats. Oh yes and orphaned hedgehogs. Without a doubt, the one I miss the most and the one I feel was so remarkable was Nina a beautiful golden Labrador who I adopted from Freshfields in June 2013. Nina had been in kennels for 11 years as she had issues that put potential adopters off so she was always overlooked. My friend Kate who works for Freshfields did a posting with a photo of Nina, I read it late one night before going to bed. I fell for Nina there and then and knew what I was going to do the next morning, she was coming home!! I live in the south in The Chilterns, Nina was in Liverpool so she came down with staff to settle her in and work with me on giving her the best chance of making it a success. I didn't need to worry, we fit like hand in glove and were best mates from the beginning. I had 13 months with this amazing and brave soul before she passed away, a time I will never forget. 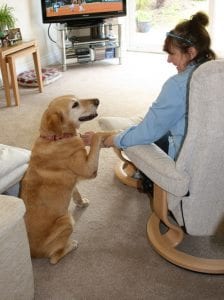 Another sad case was a wonderful German Shepherd called Holly. I found her in the middle of the countryside at 7am she had been abandoned and was totally paralysed with fear, I'd never seen this before in a dog, she was like a piece of stone when I picked her up. We had a long path of rehabilitation, Holly was brave, amazing and eventually trusted people again. She also taught me so much about animals and myself. 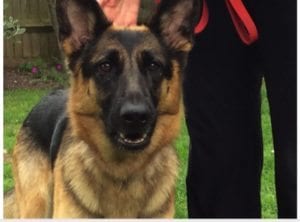 I'm grateful for Ollie and Cassie my horses, for the life I am having now and the learning curve we are on. Ollie was rescued from an awful situation and Cassie was rescued from going to the meat market when she was 21. Her owner no longer wanted her so I bought her to avoid this dreadful fate. I found Kelly Marks and IH (Intelligent Horsemanship) method of training which is to say the least awesome. Kelly works with and was trained by Monty Roberts, also known as the Horse Whisperer from California. My equine training for both horses has all been with IH. We work with a local IH recommended associate trainer Sandra on a weekly basis. The training is based on non-violent methods with total respect for the horse. Sad to say sometimes this isn't always the case in the equine world. 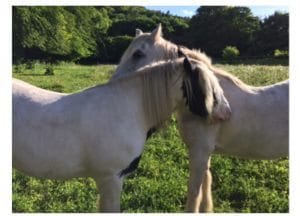 Last Saturday I had tea with Monty Roberts, Kelly Marks and a small group of likeminded people. I was fascinated to hear about Monty’s work with veterans coming back from war with Post Traumatic Stress Injury (PTSI) This is how Monty refers to it as he feels it’s a war injury rather than a disorder. In this country it is referred to as Post Traumatic Stress Disorder (PTSD). These broken people work with the horses and Monty with remarkable results. Often the connection the veterans have when they are interacting with the horses has brought some to their knees and they have broken down. This is when they start to heal and for many it has been a life changing transformation. These beautiful, graceful creatures have worked miracles with people. Monty is due to start this work in the UK for our veterans, Prince Harry has contacted Monty about coming here to start a program with horses for the veterans too. So another positive and proven insight into how animals can change and improve our life.

So compassion……. it's a big word with bigger consequences.

All I can say is my life has been enriched because of finding true compassion through that moment in time when I made the connection with animals. The bigger picture for me is animals are not ours to exploit for entertainment, they don't belong in zoos, safari parks or aquariums. My opinion is we shouldn't eat them, any of them, we want real science and cures not vivisection so not only is testing on animals wrong its delaying progress and the list goes on and on. It often brings me great pain and sadness as I see, read and am made aware of the awful destructive things that are happening to animals, people, and the environment.

The blinkers are off and there's no putting them back on. Equally turning away and hoping it will change and that someone else will do something about it was not an option either.

I have met some of the most remarkable, selfless and brave people over the past 20 years. As well as animal rights people we must remember the thousands that work in animal welfare including an army of volunteers, who without their dedication the work to improve the lives of animals/people would not be possible. It's a privilege to be a part of and to work with these wonderful people and grow in my journey.

I'm trying hard to change things for the better, I don't always get it right and at times I struggle. Monty always says he wants to leave the world a better place for animals and humans. I have tried to do this for the past 20 years too and will continue to do so. I want to look back on my life and think – I made a difference, I hope in some small way I am.