Simon, 47, from Bolton is a vegan long distance runner. He lives with his partner and fosters dogs for Freshfields Animal Rescue.

I was brought up with cats and dogs at home, and have looked after rescued ones all my life. After our last dog died, we started fostering dogs instead from the animal rescue to help to find them a home. They are usually dogs with behavioural problems, but these can often improve when outside the rescue environment and we can get some idea as to what they're like with other animals and people or what they're like on the lead. We've probably helped to rehome about thirty dogs over the last four years. 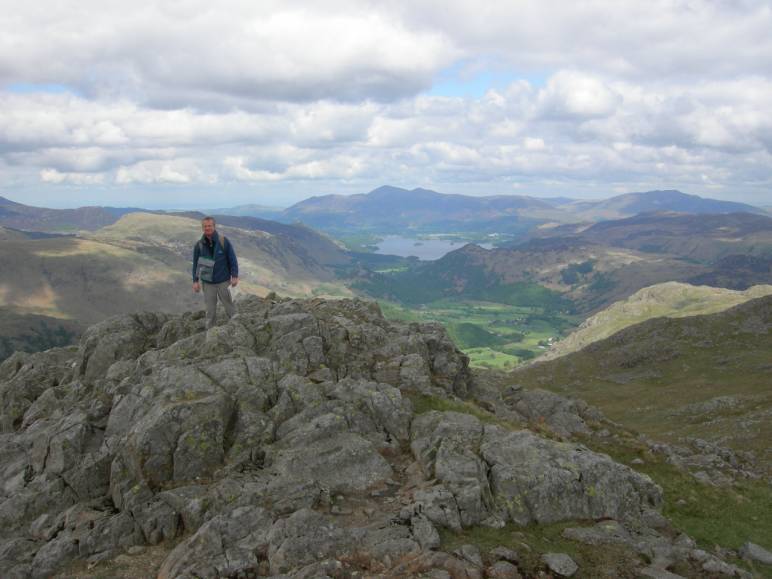 I have always been interested in outdoor activities. I’m a keen walker and cyclist, and like to go on hiking expeditions in the Lakes and Scotland. My favourite place to walk is the Lakes, where I've climbed (and occasionally run) most of the highest peaks, including Scafell Pike, Helvellyn and Skiddaw. I was keen on sports at school, in particular running and football, but as time went on I found other things took their place. 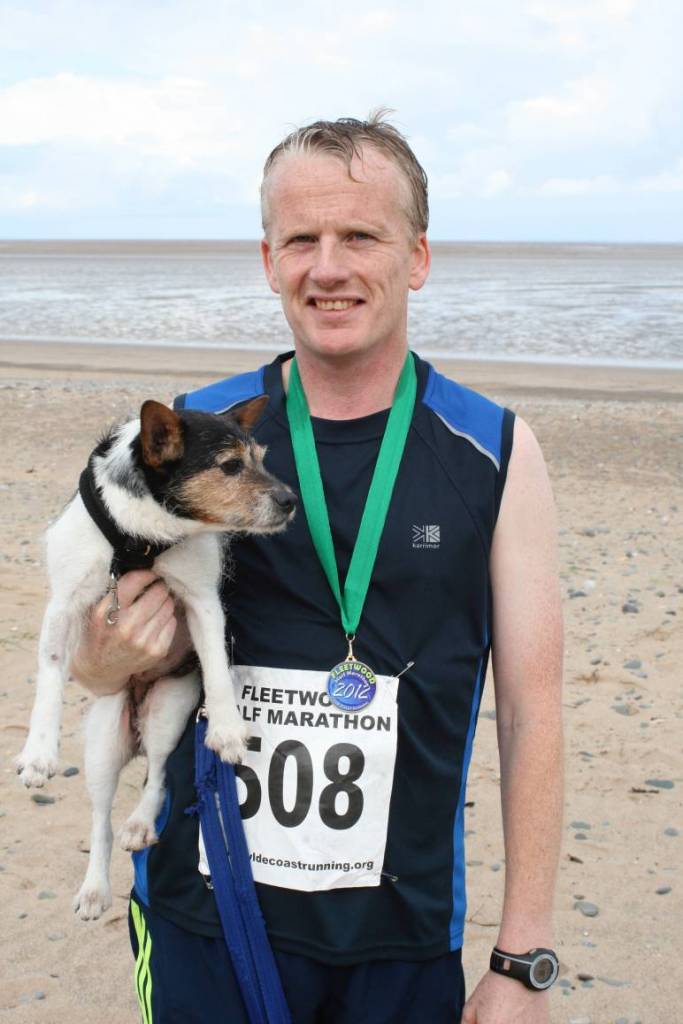 My interest in running was re-awakened when a friend of mine told me that he’d run a couple of marathons and fell runs. He would casually mention how he’d done a nine mile training run here, or a long fifteen mile run there. This seemed unreal and almost unachievable to me at the time, but he told me that I could easily do it if I did a bit of training. My interest was awakened but I still didn’t do too much about it. It was only when my partner secretly entered me in the 2010 Snowden marathon that I was thrown in at the deep end!

I trained hard for that race and completed it in under four hours. It was an amazing experience, and is rightfully billed as one the most scenic marathons in the UK. I was pleased with my time, as it was a tough course. But I knew I could do better. I was carrying a bit too much weight, and was only a relative novice as a runner. I knew what I needed to do to get better – train hard, race more often and lose weight!

Since then I have taken my running more seriously. In the six years that have elapsed since Snowden, I must have run over ten thousand miles in training. I train hard and eat sensibly (most of the time anyway) and cover anything from 40 to 70 miles per week. Sometimes it feels great but it can be hard particularly in the dark winter months. I have to treat my running a bit like a part time job - whether I like it or not, I have to do the training if I want to achieve my goals. Running is great for mental health too. No matter how badly I feel before a run, I always feel much better for it afterwards. 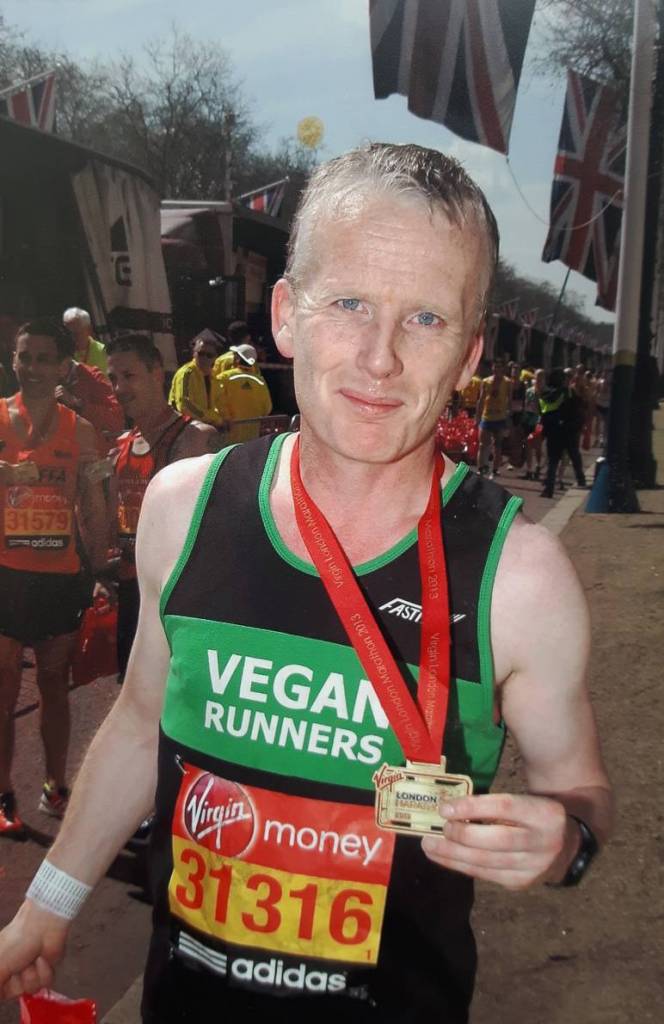 To date I’ve now completed ten marathons altogether including London, Paris, Berlin and Florence. My favourite race was London in 2014, when I ran a PB in just under 2:45 hours. I do plenty of other races too, well over one hundred since that first marathon. This year alone I’ve done over thirty races from 5K distance up to marathon. I race far too often to be at my best at each race. You can run competitively well in to your forties but as you get older you need to allow longer time for recover between races, but I don’t really stick to that. I need to enter races in order to stay motivated. If I don’t have a race entered within the next few weeks, I lose focus in training. It must be the competitive streak in me!

I also regularly take part in the 5K Parkrun. I love the concept of this; just a bunch of people of all age groups, abilities and experience meeting up once a week and going for a run – and all for free. The only downside is that it’s always at 9am on a Saturday morning, as I’m not a morning runner! 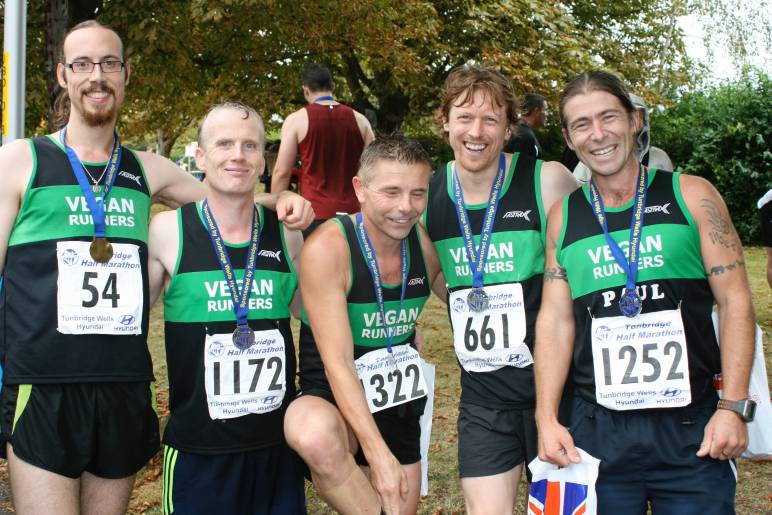 I like to promote veganism through running. I’m a member of the Vegan Runners club and often run with the club vest on. The UK Vegan Runners club now has over 1.200 members nationwide and members compete at distances from 5K to marathon and beyond or just meet up to run socially. I like to be able to show that you can run at a high level without the need to eat animal products. Even nowadays myths still persist that vegans don’t get enough protein etc so it’s good to be able to dispel those through my running. I have to check that running shoes are vegan, but so many are made with synthetic materials nowadays that it's not really a problem. I tend to stick to one manufacturer which makes only vegan shoes. When running long distance, runners often take energy gels regularly, but many of these are vegan so it's not a problem. I won't run in races, where any of the proceeds go towards a charity that supports animal research.

I’ve been a vegan for 25 years, and not always a healthy one! Although the vegan diet has a lot of associated health benefits, that’s not the reason that I went vegan. I’m vegan because I don’t agree with animal cruelty, which sadly is as prevalent in farms and slaughterhouses today as it was when I first went vegan all those years ago. I kind of resent that there is this special word “vegan” for people who don’t eat animal products. If you don’t agree with rape or murder or even with cruelty to domestic animals there isn’t a special word to describe you, so why should people who are against cruelty to farm animals be labelled differently!

It’s so much easier nowadays to be vegan now than in the early nineties. Although it was easy enough to be vegan back then, the big change now is the availability of vegan products in supermarkets and the fact that so many more people know straight away what the word vegan means. We’ve still got a long way to go, but things have improved massively in my lifetime. Veganism is the easiest lifestyle adjustment anyone can make if they care about animals – it's just a question of getting people to join the dots between the products they consume and the cruelty which lies behind them. 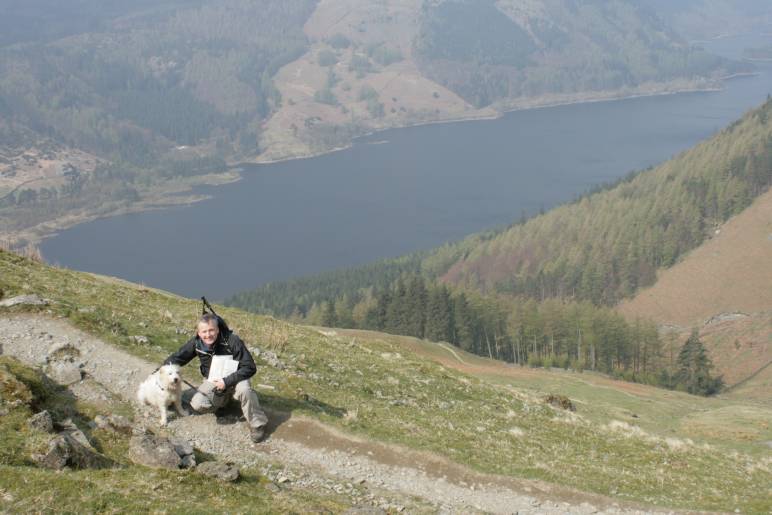 As for the future, I'd like to get in to fell running which is another challenge altogether. I'd like to complete the Bob Graham Round one day – a 72 mile run over 42 of the highest peaks in the Lake District, which must be completed within 24 hours. But I might leave the dogs at home for that one....!