Well it looks like Spring is finally here.I heard a cuckoo for the first time yesterday  and our swallows are back to nest in the barn. Isn’t it amazing how they make that huge journey from Africa to the same place here every year? If only I had the same sense of direction. I get lost every time there is a diversion at the top of the lane here.!

We often receive calls for specific colours of cat or a specific breed of dog and  for some reason we seldom have what people are wanting. We may have all collies in looking for homes and nobody seems to want them but when we do home them, all of a suidden we will have loads of people ringing us for collies!.Weird! Anyway this week we struck lucky. A lady from Cumbria had just lost her lurcher, preferably a whippet cross and was enquiring if we had any. We didn’t but I took her telephone number. Shortly after the call, I spoke to a man who wanted to get rid of a lurcher – a whippet cross. Brilliant.   The dog we have named Hugo is being fostered by a member of staff until he can be collected by his new ‘mum’. I am so pleased for him, I was quite concerned after speaking to the  dog’s owner who was , how shall I say, less than nice about his pet. Quite frankly I feared for the dogs wellbeing which is why I decided to  send John to collect  him as soon as possible. On arrival we saw that he was underweight, even for a lurcher, and seemed very subdued. Needles s to say he had not been vaccinated or neutered,  he has likely been obtained for working as a hunting dog as so many of this type are. Lurchers, greyhounds and whippets are ill equipped for a life of outdoor living. They have very thin coats and feel the cold yet most are kept in unheated kennels as befits the status of a dog kept for working .  I have never been able to understand the logic of this, why do they think working dogs require no comfort and warmth especially through our freezing winter months. Do they believe dogs will refuse to work if they lead comfortable lives? If that were the case why do pet agility dogs love their working trials? There is no logic behind it at all and the dogs suffer in silence. It makes my blood boil. My own Lurcher Meg lived outdoors  before I took her in at the age of 9 years(she was taken to our Vet to be destroyed)Now, if it rains or it is cold, she simply looks out the door and quickly retreats to her bed by a radiator as does Ben an ex farm collie who has lived with me since he was brought here at the age of nine years.They both hog the baskets near the radiator  so I  can only imagine how they coped when in their previous homes but .let me put it this way – neither dog fretted  when they arrived here.They settled in immediately and never looked back.

We have been offered a home for our two lovely cockerels. Louise  has land attached to her homeand she already has pets from Fresh fields including a llama called Herbie.We will all miss their cheerful cockadoodledoing (is that  even a word?). If w e had  a safe and secure place for them here I would love them to have stayed but I know they will have a good life with Louise. Happy days ahead boys.

Three of our  first litter of kittens have now been homed but one little chap has been left behind.  Hopefully he will follow his siblings very soon but at the moment all the calls we are receiving are for ‘anything but black and white or black kittens’!  The mother cat brought in with her 2 weeks old babies (also black and white)  is doing fine, she is  an affectionate little cat and such a good mum even though she is barely past kittenhood herself.

This week we lost one of our permanent felines.Dear Minnie  had lived with us for many years and spent most of her time in and around the kitten room where she was  allowed to sleep  ; she chose not to join the other cats in either the conservatory or one of our heated sheds being a bit of a loner She preferred to stay away from the other cats and over the years she had a recurring skin problem which was the main reason she was never found a suitable home. Not averse to giving a whack of her paw to members of staff  who were overly familiar with her, she seemed to enjoy her life pottering around the shelter and it seems very strange to us all without her rather  dominant  presence.RIP Minnie.

Our fields are in a horrendous state after the winter but our horses are now going out to their summer grazing fields so we have an opportunity to do something with them. Our local Horse feed supplier Mr Roberts  has fertilised about ten of the acres and laid lime (all our land is lime starved).Lime is needed to balance the acid in the soil in order to provide the best growing conditions and our grazing land is very poor so needs regular top ups of Lime. We will also need to re-seed some of the fields so there is plenty to do once the majority of our Equine friends are away for their summer holidays. Once the last horses have gone, we will only have 9 left at the shelter , until later in the year when they all return to be stabled over the winter. The remaining nine are kept here because for one reason or another, they need extra care due to their age or health requirements.

The track resurfacing has been done and this has made a huge difference to visitors, staff and animals alike.No longer are there huge potholes making it almost impasseable  though we will need to keep topping it up when the potholes begin to reform as they will do inevitably with the amount of traffic it has to contend with, not to mention the regular trips up and down made by our  tractor.

Our horses have done some damage to  the adjoining perimeter wall    and having knocked down the fencing we erected last year to prevent that occurring, we are now faced with having to have it done all over again. Fortunately one of our wonderful local  supporters has offered to pay to have this done.We are very grateful to her.What would we do without this outside help? I had placed an appeal on our Facebook page for volunteers to help us with the fencing but only one person volunteered and he travelled from Rhyl which is over an hour away. Just this one extra pair of hands made such a difference and with Michaels help, John was able to get some more DIY jobs done. If you read this Michael, I cannot thank you enough for giving us some of your precious spare time.

The two abandoned ponies are safe for the time being, Mei and I are going to see them today and give advice to the people who are caring for them.They have no experience with horses but are willing to keep them on their land which is great news.They just need some support with their care which we are happy to provide.

The dreaded Velocity  Zipwire event is looming close, next saturday - really scared so have been trying not to think about it. If you would like to sponsor me and help raise some funds for the animals at the  shelter, you can log on to my Justgiving Page and donate.Just copy and paste the link below.It will take you to the page.

Last but not least, the latest photo of  my beautiful  lurcher Meg who is in her fifteenth year shows her looking out and deciding it is too cold for her. A typical Meggie  reaction  and stance as I mentioned earlier. Up until 2  months ago, she was still soaring over four foot fences and racing round the field in that typical lurcher/greyhound  short burst of energy. Lately her back legs are showing  weakness and her heart is struggling to deal with any extra exercise so she comes out less and less. Oh, the vagaries of old age! 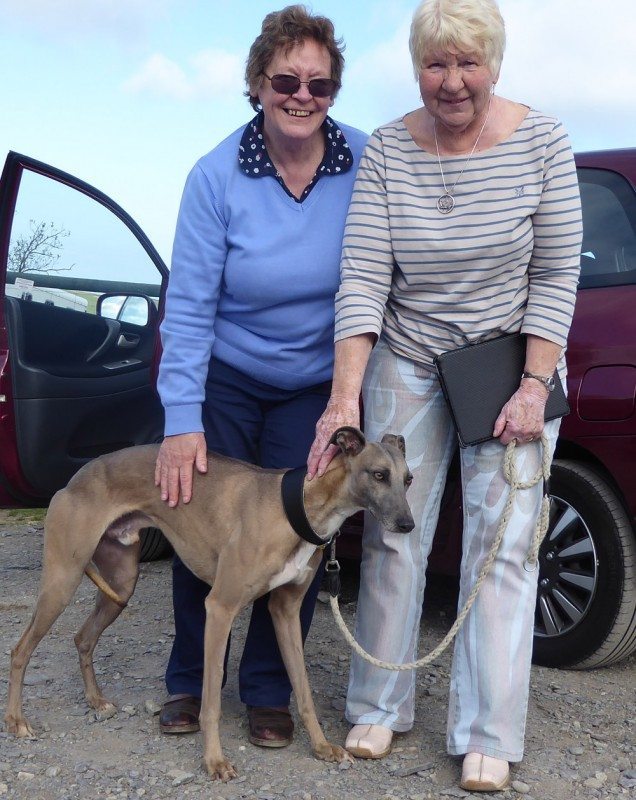 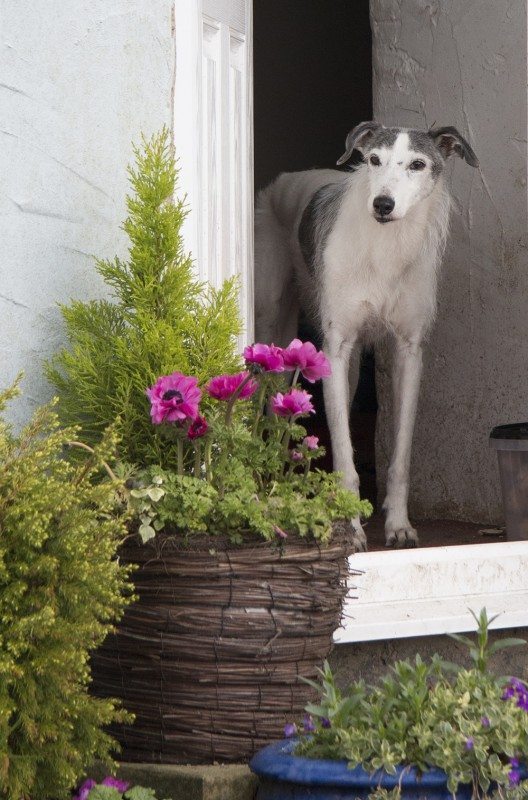