Two weeks into the New Year.Has it been quiet? No, it has been incredibly busy.Those who didn’t manage to part with unwanted pets before Christmas are now clamouring to get rid of them now! I do not recall it ever being this busy so soon after Christmas.

I am pleased to say that the initial plans for our new cattery have been drawn up so we are all looking forward to seeing that dream come to fruition but in the meantime we are still struggling with the problems which arise every time it rains. Once the plans are submitted we will have to wind down our admissions; what we don’t want is to find ourselves ready to move ahead with the demolition of the building and still having  20 plus cats for which we need emergency accommodation.Certainly some can be accommodated in other areas of the shelter, there is usually  some room in the conservatory and we can reserve a couple of pens in the kitten room for those cats temporarily displaced but we still need to reduce numbers before the building work commences.

One of our most recent admissions is a blind Bengal/Maine Coone cat called Tiger. 3 Years  old Tiger was born blind and he needed  a safe secure home. In an attempt to find a suitable home  I posted his story on our facebook page and a  place  was found with a lady looking for an indoor cat. Keeping certain  species of  pets indoors is becoming more common nowadays and although we prefer young healthy cats to have the option to explore and enjoy an outdoor life as much as possible, with so many cats being killed on roads, it is easy to understand why some people are anxious about allowing their felines to have that level of freedom. That fact notwithstanding, I still believe that where possible ,cats need to be allowed the freedom to climb trees and explore their surroundings, Captivity is never the best solution for an animal whose natural  instincts are not to be confined, but there are instances where an indoor home is the only option and disabled  and blind cats like Tiger need such homes. 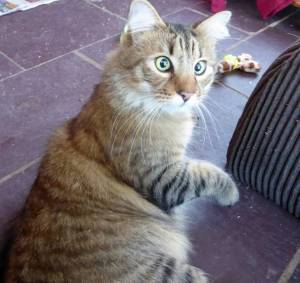 Rabbits too are becoming more popular to keep as house pets although once again, I believe where possible,  they need to experience fresh air. Having said that I would prefer a rabbit to live indoors and have company and attention than a rabbit kept in a hutch and out of sight, out of mind! Nothing is ever black and white so each home needs to be assessed with regards to the needs of a particular animal and I have no criticism of those who choose to keep their pets indoors for whatever reason. It simply would not be a choice I personally would make. I recently ‘met’ a beautiful healthy 10 years old rabbit who lived indoors most of the time though it has to be said that he was still allowed out in the garden on nice days so he had the best of both worlds.

Two  stray pure white Lionhead rabbits have been found and  given over to our care, they have not been microchipped and enquiries with neighbours has not resulted in finding an owner. I placed an appeal on facebook for a volunteer to come and help us care for our rabbits but so far there have been no takers .We really could do with some more hands on Volunteers at the shelter.  Winter is always a bad time for receiving that much needed extra assistance in the animal units. People are willing to help  when the  weather is better, but come winter, all but the most stalwart volunteers fade away!

This icy cold weather is getting us all down, it’s so hard  especially for those who work in the stables. Working outdoors when the fields are soggy and muddy is no fun, and walking dogs fighting against the elements is hard too.  Altogether it’s pretty miserable , but looking on the bright side, we have not had the thick snow which other areas have experienced so we have been fortunate in that respect. Only the horses seem to want to go out ;  they are so impatient in the mornings, kicking their doors  and whinnying in their anxiety to be back in the fields. It always makes me feel sorry for horses and ponies who languish in stables all day until their owners choose to take them out for a ride. They are big animals and as such need their exercise on a daily basis and not just when it suits owners. Our fields may not be the best but our horses are happy horses. 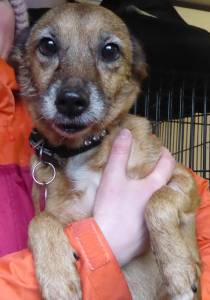 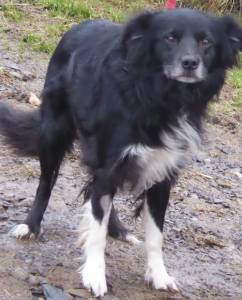 Recently we received a call to help with 2 dogs whose owner had been taken ill suddenly and rushed to hospital .Due to a mix up with a relative , the dogs were on their own all weekend and by the time we arrived at the property, one little dog was seen frantically scrabbling at an upstairs window and neighbours said the distressed dogs had barked all night.  After speaking to the owner who had given  permission for us to enter the property, I decided to bring the dogs back to the shelter. A week later the dogs were signed over to us. Mark(not his real name) having been discharged from hospital, had realised that he was unable to care adequately for his pets and although he loved them and admitted to missing their company, he felt they would be better off being rehomed. This may seem a normal attitude for a man in his position to take but in fact, it is far from usual. Most consider their own feelings first and the welfare of their pets comes very low in their priorities. We have had many similar scenarios where it is clear that animals are not receiving the care needed but few owners do the right thing by their pets and in those cases all we can do is give advice and hope that eventually they will see their way to taking the  right action. Kudos to Mark for being kind and sensible enough to do the right thing by his dogs. Both dogs were well fed and well balanced although both needed neutering and the older one urgently needed  a dental to remove rotten teeth. Both are now ready to be placed for adoption.