The nights are drawing in

There has been a sudden influx of underweight, juvenile hedgehogs lately, nineteen in one week alone! Given how late in the year it is, these guys will now remain in our care until next spring, as they won't reach their target weight to successfully hibernate. Our hedgehog hospital will now be filled to capacity for the next six/seven months so we need all the help we can get to care for our prickly friends.

Recently, we launched our Hedgehog Over-Wintering Project, which is part of our Urban Wildlife Initiative. To find out more about hedgehogs and ways you can help them, and us to care for them, click HERE.

Hedgehogs are now seriously endangered, in the fifties we had a population sixty million strong, sadly their numbers have now dwindled to around a million. They certainly need all the help they can get!

Talking of hedgehogs, one arrived recently suffering from the most severe case of mange we have ever seen. Initially we thought it was suffering from ringworm, but after testing it turned out to be mange. We are delighted to see the improvement after treatment. This chap will make a full recovery. 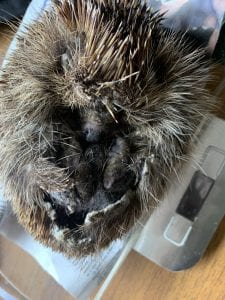 Sadly, our little grebe chick passed away. You simply never know what will make it where wildlife is concerned. Some creatures with the most appalling injuries survive, while others that seem strong and healthy can suddenly die. I suppose if any wild creature can be easily caught there has to be a serious underlying problem. Happily, we do have a marvelous success rate! 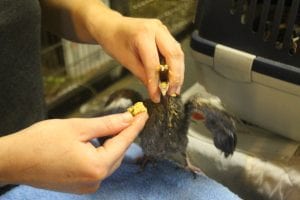 Happily, our finch chick is thriving, so much so, it's driving the staff crackers with it's continual, shrill calls for food. It's utterly insatiable and simply refuses to grow up and feed itself!

On the release front, all our gulls are now back in the wild along with several birds! That's what it's all about!

Munch was found abandoned in a garden sharing a cage with Jumble, a rabbit. Jumble accidentally injured Munch, dislocating his hip. 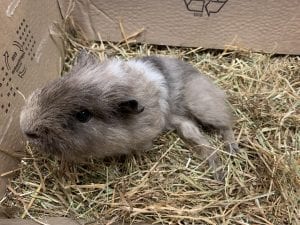 Happily, he has made a complete recovery now, here he is looking so much happier. 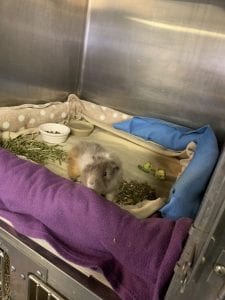 Poor Munch also had a terrible mite infestation and was underweight. Jumble wasn't in great shape either, he was flea ridden and appears to have lost his front teeth. Our vet is due to check his teeth soon to see how severe the problem actually is.

These guys are only about six months old, so what an awful start to life. Now they will receive all the tlc they deserve.

We urgently need long shredded paper and towels for our overwintering hedgehogs.

Out and about early Autumn.

This is the time when starlings begin to grace our skies with their murmerations, which will peak in late November, early December. Thousands of birds can be seen taking flight and forming massive dark shapes in the sky, all moving in perfect unison. Some of these clouds consist of 100,000 birds as hoards of new migrants arrive in Britain each week. It's thought that starling form murmerations to avoid predation, they also act as a giant sign post attracting other birds to the roost. The more birds, the harder it is to single an individual out.

Early evening is the best time to view this magnificent spectacle, if you're interested, check out RSPB, Leighton Moss, it's an excellent viewing site.

September is also the time to watch the migrant birds depart. Swallows and house martins begin their long journey south, seeking the warmer weather in Africa. As they depart, fieldfares and many types of ducks and geese arrive on our shores. Wetlands are excellent spots to witness thousands of geese and wading birds.

Now is a good time to pick blackberries. There is a legend that says blackberries should never be eaten after 29th September, as the devil will mark them after that date. It is a fact that they taste worse as it gets colder. If you do go foraging for blackberries, always leave the lower ones for wildlife, as dormice, squirrels and badgers love to eat them.

Rose-hips are now ripening and given they are edible and high in vitamin C, they make excellent jams and herbal teas. They can also be eaten raw but avoid eating the hairy inner seeds as they will irritate the intestines! Birds, squirrels and rabbits also enjoy feasting upon rose-hips. 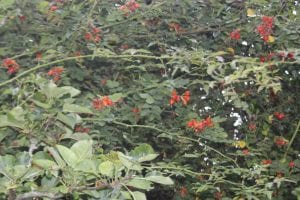 Also, remember to leave the seed-heads on plants at this time of the year as the birds love feeding on them and will thank you!

that the Queen legally owns all unmarked mute swans in open water?

That baby puffins are called pufflings?

And that rats are excellent swimmers and have even been seen climbing out of toilets?