Swift has a visit from an old Friend.

Thank goodness the rain has stopped, giving our fields a chance to dry out.One of our horses had a special visitor too.Jax who used to work here and who adored bay pony Swift, came to see her old friend.Even after several years had passed since they last saw each other, he seemed to recognise her and came over to nuzzle her ,something which he reserves for the special people in his life. It was good to see Jax again. She was only the second person I took on to work here shortly after opening the shelter here in Wales, Rhian being the very first employee. Once people leave, they move on in different directions with their lives and it is nice to see them again and catch up with what they have been doing since they left the shelter.

Good news. The cow we were trying to rescue has not been put down and is now declared fit to travel to her new home and has all the relevant paperwork.It is all very confusing but the Important fact is that she does still have a future ahead of her and with some lovely people who will love and care for her as they do all their animals. The rescue is planned (again) for this Friday. John will be taking the horsebox to collect her . I am sure the neighbour of ours who complained to the Authorities about us keeping a cow on our land a few months ago, and who reads this blog and anything else made public about the shelter in Wales,will be preparing to make another malicious phone call . For his/her information – we are registered to keep cows,pigs, sheep etc so you are wasting your time reporting us!

We have yet another chihuahua admitted, what is it with all these toy breeds arriving? Of course, it always happens when a certain breed becomes a fad. At one time it was dalmations when the film 101 dalmations was out in the cinemas.Then huskies became popular with the Richard Gere Film ‘Hatchi’ (not sure if that is right spelling) Lately it is Pugs and Chihuahuas as seen being toted around by celebrities. This little dog Minnie is adorable.Like many of this breed, she is anxious around strangers but with most people, she quickly overcomes this fear and once she accepts someone she is such a character with a sweet nature. Most people who meet her are enamoured with her, even those who are not usually keen on tiny dogs. She loves to race at top speed around the field and it makes me think of all those toy breeds who are carried everywhere and seldom ,if ever, experience the enjoyment and freedom of real exercise. 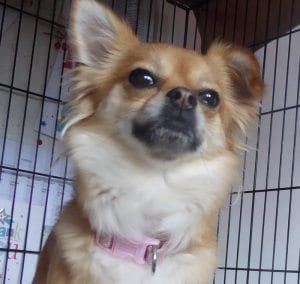 It is a bit slow on the dog rehoming at the moment but the cats are going well. Four adult cats were rehomed this morning, that is including Nico who was returned for not being friendly. We had told the person who adopted him that he was nervous and would take a few weeks or more to settle but as with so many, she did not listen and then expected too much of him too soon and returned him. This time he has gone to people who really understand cat behaviour and who are not worried if it takes a few weeks or a year before he properly becomes part of their family.We are all so pleased for Nico.

A few days ago a sweet little Lionhead rabbit was found on the side of a road locally and brought to the shelter .One of his back legs appeared to be set at an unusual angle . Gail, one of the staff here took him home where he immediately befriended her two guinea pigs. We arranged for her to take him to our usual Vet in Pwllheli. The young lady Vet who examined the rabbit was dismissive over his prognosis, said he needed to have the leg amputated and that would cost us more than the rabbit was worth.Her advice was to euthanize him. That attitude does not go down well with me, over the years we have been advised by various Vets to have certain animals destroyed and they have gone on to live long and happy lives. I am always in agreement when there is no doubt that it is the right thing to do to prevent suffering and yes, we do have to watch our expenditure but never at the cost of an animal’s life. We decided to take him to another Vet for a second opinion and what a different response was received there. Cattery Head Jac, who made the 2nd appointment was told that it was an old leg injury and was causing him no pain . The advice given was to leave well alone, the rabbit is enjoying life at the moment and there is no reason to put him to sleep or to go along the amputation path.The little guy is really happy with his piggy pals and in spite of his awkward leg, he is as spritely as can be. 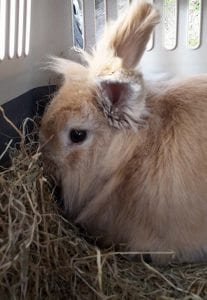 I believe that some vets are far too quick to destroy animals and I have to say that very few Vets seem to have the compassion one would expect someone to have in that profession. We were glad we made the decision to obtain a second opinion. Vets, like Doctors are not infallible so always get a second opinion if you are not satisfied with the diagnosis your pet has been given.

Reminder:
15th April(Saturday) 10.30am-12.30pm. Easter fair at Beaumaris Town hall. Can you spare an hour to come and support us on the morning? All welcome, Special Easter chocolate Tombola, home made cakes, books etc.Admission £1,(inc tea/coffee.) children admitted free.Come and see some of our rescued rabbits who will be there to meet you.
7th May.Sponsored 5 mile Dog Walk through forestry at Blaenau Ffestiniog.Sponsor forms from Fresh fields charity shop, Porthmadog high street.Milfeddygion Vets,Pwllheli. Or the shelter: lesley@freshfields.org.uk.
Photos: Jax with Swift, Bramble the Lionhead rabbit and Minnie the Chihuahua.