If anything, wildlife has become even busier, and lunchtimes have long become a thing of the past!

Hedgehogs continue to arrive, but mainly tiny ones. This little hoglet had a terrible infestation of fleas which would have caused severe anemia if left untreated. It's normal for hedgehogs to have some fleas, but not on this scale! This guy was absolutely jumping with the blighters; talk about getting folk scratching!

S/he only weighs 102 grams, so will be our guest for quite a while. 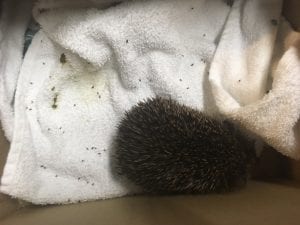 Currently we have eighty hedgehogs, and caring for them certainly takes a fair chunk out of the day!

Numerous feral pigeons and woodpigeons, and our five shelducks that were wandering around a busy residential area with their frantic mother, have been released this last week, along with four herring gulls. How fab is that?

We still have seven herring gulls, the latest arrived with suspected botulism, hopefully it will pull through. Fingers and toes are crossed! 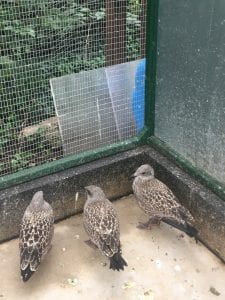 We also have a single duckling, I'm sure more will arrive before the summer is out. Hopefully,  it will be released with others, rather than being released alone. We prefer to release ducks in groups, to prevent them from being bullied by resident ducks. Usually, our groups are utter thugs by the time they are released and it's them doing the bullying, especially when they go out in groups 12+ strong! 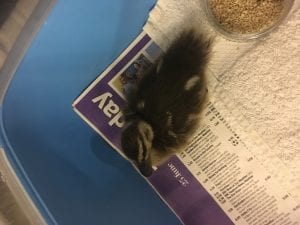 On the good news front, we're all delighted to see the mistle thrush, that took a fall from a tree being felled, now in the pre-release aviary,  along with a sparrow and the tiny goldfinch chick that was found next to it's three dead siblings. 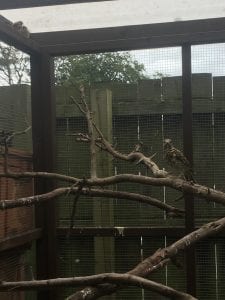 The mistle thrush is taking center stage, the goldfinch and sparrow are top left on the ledge. Our wildlife rarely pose when we want them to and we're keeping this blog real.

Now, I know these beautiful guys aren't wildlife, but eight pregnant guinea pigs recently arrived at our wildlife and small mammal unit. Currently they are all being cared for in a foster home, thank you, Barbara! 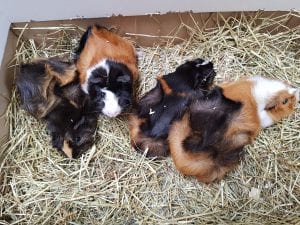 Sadly, one of the girls lost her babies. 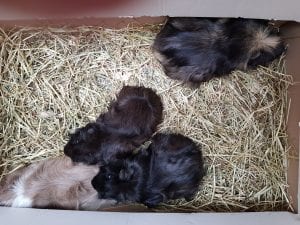 Six are still waiting to deliver..... 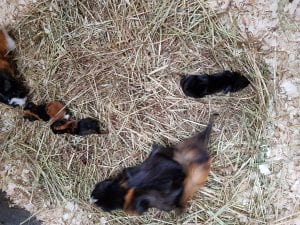 and one has successfully given birth to triplets. We'll keep you posted as the drama of the multiple births unfolds!

As usual, we've been out and about in our local community with our Urban Wildlife Talks. This time we took a rescue pygmy hedgehog to The Glade Nursing Home, that held a fun day, with all proceeds being donated to us, a huge shout out and thank you to them. 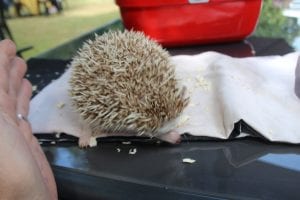 We thought it was a great opportunity to raise the profile of these poor creatures that originate from Africa. How sad that a creature that naturally walks five miles a night is reduced to being kept as a pet in a cage, however well equipped, and all because they are cute. They need a lot of care as they are too small to hibernate and will die if they attempt it, so they need to be kept warm.

We also enjoyed an Urban wildlife talk for an over 70's friendship group at St Patrick's in Southport. We took Sam along, one of our adopted, former rescue dogs... goodness, he sure knows how to spread the sunshine, how those guys loved him! 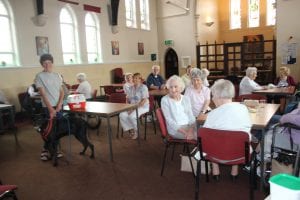 We are still desperately short of towels, long/short shredded paper and cat/dog/hedgehog biscuits, no fish flavours though, as our hedgehogs won't eat them. We also urgently need bird seed and mealworms to feed our growing brood of wild birds, so fat balls, wild bird seed, niger seed, sunflower seed and peanuts would be MOST welcome. We would also welcome hamster cages and rabbit hutches, especially hutches with runs.

Out and about this July

Swallows, swifts and house martins have been gracing our skies for the last few months, such beautiful aerial acrobats! For those of you who find identification of these birds difficult, here's a quick guide.

The swallow is the largest and best known of our summer visitors, being up to 19 cm long. It is the most colourful and has a distinctive blue sheen and a long forked tail. They have orange/red chins, under a black, short, thin beak. They feed upon flying insects and butterflies. Swallows usually migrate from Africa, but are seen globally. In the UK swallows are seen from March to October.

Swifts are very distinguished flyers, twisting and gliding, often at great heights. At dusk, they can fly so high they disappear from sight. They are up to 17 cm long and catch insects on the wing. They are dark brown, but look black against the sky. Their wings are long and narrow, their tails short and forked and they have short brown legs. Swifts spend nine months on the wing and hunt, mate, play, preen and even sleep on the wing. They only land when they have a nest. Young swifts can go into torpor; they slow their metabolism right down if it's cold or their parents have gone on a long journey searching for food. Swifts have a shrill, piercing call and are visible in the UK from April until September.

House martins are urban birds that have conspicuous white rumps, which makes them the easiest of the swallow family to identify, often resembling mini orcas. They have black/blue bodies and slightly forked tails and a white belly, and their beaks are short and thin. Their nesting habits are distinctive too as they build mud nests under the eaves of houses and barns.They are up to 13 cm long, and feed entirely on insects caught on the wing. They are seen in the UK between March and October.

that bumble bees can control their body temperature? When they get chilly, they detach the muscles that they use to move their wings, then, by moving the detached muscles rapidly, they produce their own body heat. This is why you often find a motionless bumblebee on the ground or on a flower. Usually they are fine, they're just heating up their bodies and are unable to fly due to the detached muscles. 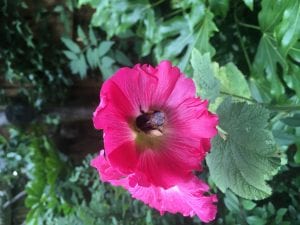 Turtles can breathe through their bottoms,

and chicks can communicate with their parents and siblings by sound before they hatch.