What a week. Come to that, what a year! We have lost so many of our dear old horses and ponies this year but we were not expecting to lose our dear Blue quite so soon. Blue suffered from liver problems after years of neglect  in his previous home but we thought he had a few more years left in him. It was a real shock to find him down and suffering from a twisted gut.The Vet could do nothing to save him and so we had to let him go. Like all our equines at the shelter, he was dearly loved and will be sadly missed. At least he survived a lot longer than his  seven companions from that home, they were so badly damaged by their neglect , they  all died long before their time. The woman in question  was very autocratic and refused to take advice from more experienced horse people. Time and time again she was advised  how to care for the ponies but she believed that only she was right in her opinions which eventually led to the  early death of five of the eight young  ponies rescued. We rehomed two of the healthier ponies and  23 years old Blue has been with us for eight happy years. He was a dear kind little pony, no trouble at all and there was not a nasty bone in his body. RIP dear Blue.

New horse Duke is settling in well and seems to be bonding with longterm resident Rocky.Its strange (or maybe not!) that same coloured horses appear to be attracted to one another – our chestnuts all stay close to one another, Vanessa calls them ‘The Ginger Boys’. Duke is not exactly the same colour as black and white ‘gypsy horse Rocky but they are similar in build and size and in spite of their different markings, they do look well matched. Perhaps it is something like  human beings who are supposedly attracted to similarly attractive people- I know of quite a few married  couples who could easily pass for brother and  sister as their features are so alike. Duke  is turning out be rather a naughty boy – he causes havoc in the stable yard, opening all the stable doors and letting out the horses to cause chaos! Unfortunately he is also showing that he may be very quite and placid but he has  a very stubborn streak in him and if he doesn’t want to do something, he will have a nip at the person annoying him. This is indicative of  how he was or rather was not trained a s a youngster.It is a bad habit which should have been nipped in the bud when he was young.  Oh well, nothing like a challenge to set you up for the day. I think Vanessa and colleagues are going to have a fair few challenges ahead.

Our kittens are beginning to find homes and today more came in. A feral  cat had given birth at the back of a hairdressers shop in Anglesey, one kitten was caught this morning and we are just waiting now for the Mum and another baby to arrive. Hopefully the remaining  4  kittens will be caught easily by this evening.As with many feral cats, they are very pretty,mum is a  grey tortoishell and the babies all have  greyish markings.Once they become used to humans handling them, they should be easy  to rehome.

We have all the kittens now back with mum who is a true feral and is letting the staff know that she is very annoyed at her capture and all the care and food in the world is not going to make her forgive them for the indignity she is suffering!  Once the babies are eating well on their own we will have her spayed and release her back where she lived. We already have 12 feral cats in our enclosure and I really don’t want to add any more at the moment.Keeping them here is just another  form of captivity and that is not what I want longterm for them, however feral homes are few and far between so their stay here can turn into a year, even two or three.

Foster carer Mion looks after mother cats with newborn or very young babies and when they are ready for homing she sends them back to us at the shelter.This morning the first’batch’ arrived brought in by our ever helpful volunteer Moses who has been trapping and fostering cats and kittens for us for the past couple of years. I remember well the day I met Moses and asked if he would help us regularly with the feral cat problems around his home area of Porthmadog. He shook his head emphatically and told me he was in no way interested in making such a commitment. That was four  years ago. He has been an invaluable and hands on volunteer ever since.He really is the cats friend and we  too don’t know what we would do without him.I can’t remember what made him change his mind but I rather think that he was drawn in  without actually realising what was happening.Thank goodness he failed to realise the  power of ‘The Animal Rescue Spiders Web’! Those who get caught up in it seldom get away. Haha.

Two cats returned after 4 years out in a home.Such a shame. Max and Timmy, pure white cats are now 9 years old and have lost both their previous homes due to bereavement. That is something which is impossible to avoid, none of us can predict the future, however that brings me to an issue which cropped up yesterday. How old is old? At what age do we draw the line at people adopting young animals? I know  people in their eighties who are fitter than those in their forties and vice versa but is it fair to rehome a kitten or a puppy  of 8 weeks to someone almost eighty years of age? My thoughts on this are that most people in their late seventies and older are not as steady on their feet as younger people and therefore a tiny kitten or pup is likely to get under the feet and  cause a potentially life threatening  accident. Until a cat is old enough to be neutered at six months it should really be kept safely indoors so cat litter trays will need to be kept scrupulously clean. Is the person fit enough to be bending down regularly and doing this? As the animal grows, there is increased activity and a  young dog will need plenty of exercise on and off the lead, can this be provided in all weather and at least twice daily? The Future is also a deciding factor. On average a cat or dog lives to the age of fifteen  years by which time the person adopting the pet will be over 90. I am not ageist (Im no youngster myself) but it seems to be that when deciding what pet is suitable, all factors have to be taken into consideration. Of course it helps if there is a relative willing to take over the pet  should anything happen to the adopter,though my past experiences have shown that when it actually comes down to it, few relatives will actually step up to the mark.

It is a difficult topic , especially if the person requesting the pet is a good person who has genuinely loved his/her previous pet and is longing for the company of another. We don’t want to cause added distress but at the end of the day we are here to find the most suitable homes for our rescued animals and I believe that we need to steer them to a pet which will itself be happier in a quiet home and one which is less likely to get under the feet and cause mayhem! 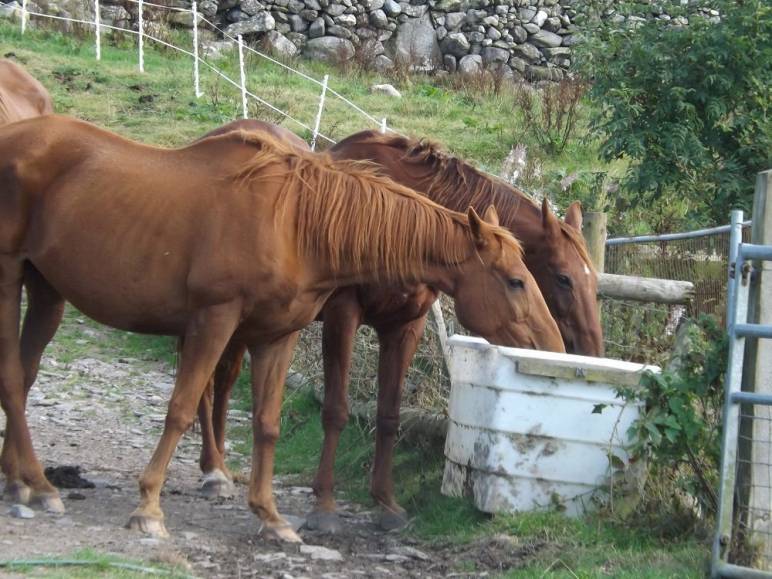 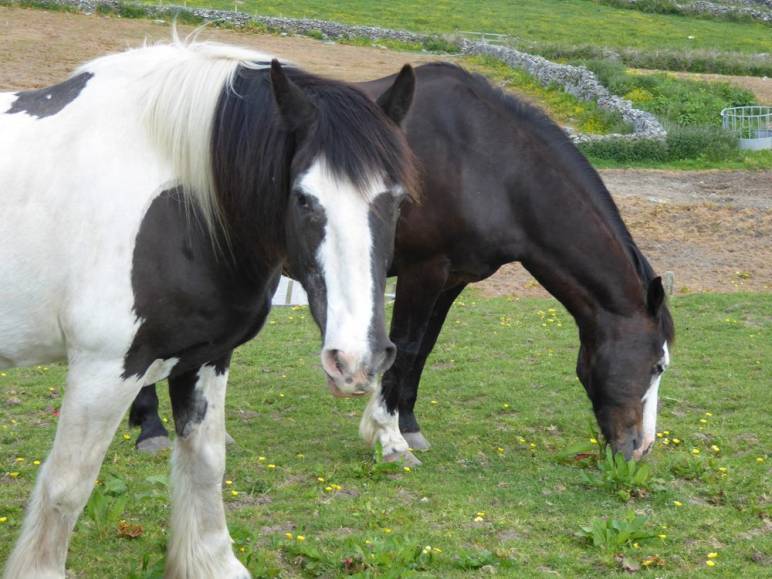 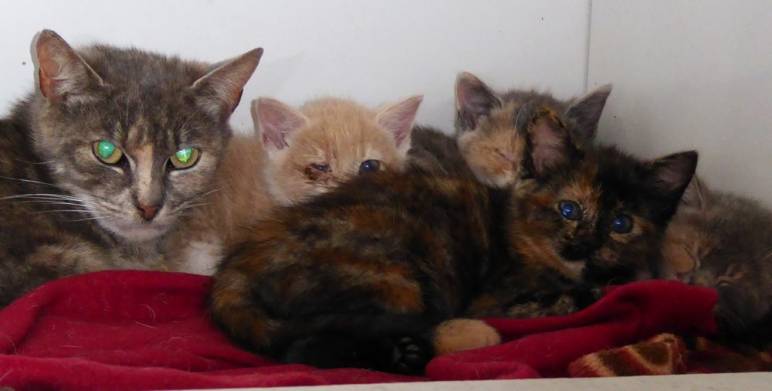 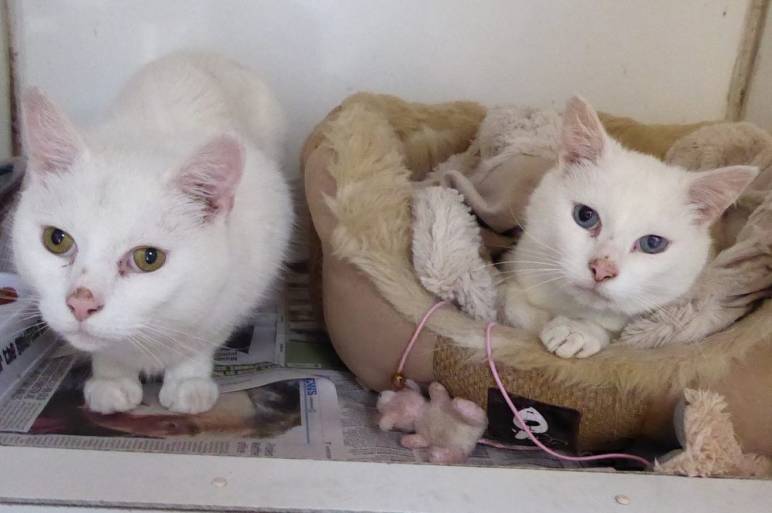 Photos: Mei sharing her coffee with dear Blue(taken 2 years ago), two of  The Gingers Dids and Jimmy, Rocky and new horse Duke, Moses handing over a fantastic cat climber to Sue who works in the cattery, feral mum with her baies and Max  and Timmy who have just beenr eturned.