A very old cat is abandoned.

After a hectic week of adoptions, all our foster homes bar one are now free for the next batch of unwanted dogs.There have been a few issues which have caused some tension and annoyance but that is par  for the course in any animal shelter. We deal constantly with pet owners who seem to think we are here to run round after them, and who show no gratitude for the work we put in to help them .An example of this was a woman who asked us to take a young lurcher she could no longer keep.Well, in truth , to say she asked is  a polite way to describe how  she virtually demanded we help. Her attitude was that of someone who thinks the world owes her a living but the dog was our priority and so her rudeness was overlooked. According to her, the dog was never walked because she was untraineable! When the poor dog managed to get out, she had complaints from neighbours and then the Council had warned her that if she did not get rid of the dog,she would be evicted and she and her children would be homeless. There was no room at the shelter at that time,so I placed an appeal on our facebook page  for a foster home and after finding a place , I rang the woman to say we could take her dog and ask when she could bring  her in.To that she retorted that she we had to collect her, she could not drive and she had no friends,neighbours or family to help her.Fair enough. I then made loads of phone calls ,placed another appeal on Facebook and found someone willing to collect said dog and take her all the way to her foster home(quite a distance between)I gave him the details and phone number. Guess what – when he rang her to say he was coming for the dog, she said  ‘I’m keeping her now’ and put the phone down!! So much time and effort wasted. Was there a follow up apology or explanation for this?  Of course not but do we continue to worry about the welfare of the dog?Yes we do and that is added pressure now because if the dog is never walked and is causing problems, how will that improve if kept in the same home?  Some action is needed but if the woman in question refuses to co operate,it makes dealing with the problem very difficult. RSPCA maybe,but again if there is no actual physical cruelty involved,their hands are tied also. We can’t help them all but it still preys on the mind when we fail.

At the weekend, a  very caring and kind young man brought in a  tiny wild baby rabbit which he had found.It looked as though a cat had gotten hold of him, he was very cold and lifeless, his fur was sticky and the little bun was quite clearly in shock. Privately I thought he would not last the day, but where there’s life there’s hope  so a liquid meal was made up for him and he was placed on a blanket covered  heated pad to bring his temperature up to normal.  After being fed with a dropper he seemed to perk up a little  so staff member Gail decided to take him home when she finished work. She kept him in the pouch of an old hooded jumper ,fed him throughout the night and three days later he is still alive and getting stronger by the day.  If he survives, we will release him back into the wild but only when he can look after himself. In the meantime Gail is doing an excellent job as his replacement  mum. 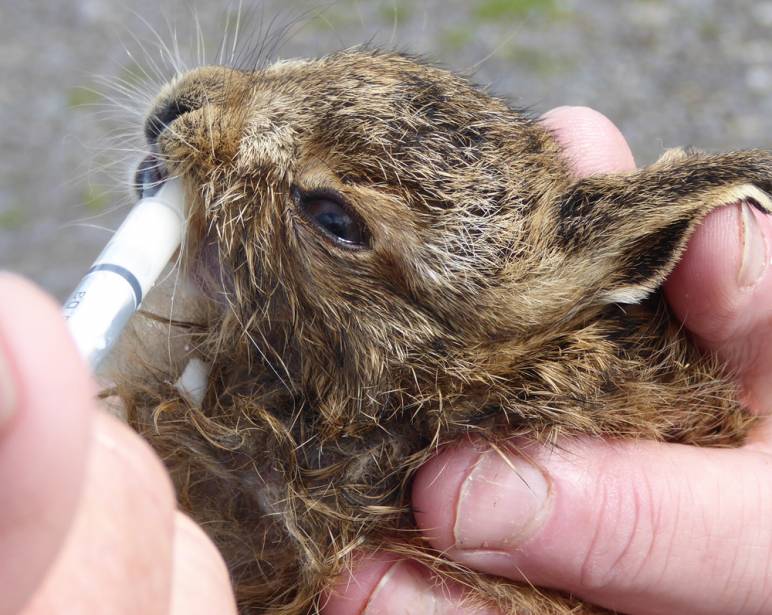 Our new staff member Lucy is settling in well, she will be caring for the dogs at the shelter and has taken over from the previous girl who found the work ‘too boring’! Working at an animal shelter can be many things, however boring is not one of them unless your heart is not in it and if that is the case you should not be working with rescue animals. Even office dog Molly likes our new colleague and Molly is a very discerning dog so we hope Lucy will be with us for some time to come.

A few weeks ago we took in a group of 13 farm kittens, many of which were quite poorly and had eye infections. At least half of them looked very poor indeed and cattery manager Jac split them into two pens, one for the poorly ones and the other for the healthier looking kittens. With treatment and worming they have all improved except for one little chap who has completely lost the sight in one eye,sadly his infection was too far advanced to treat successfully. It is quite Amazing how they have all rallied round with the wonderful care given by our cattery staff.The photo above is of the kittens as they are now. What a beautiful photo taken by Jac. I Think she should become our official photographer now! Most of the photographs I take are either blurred or  heads cut off  and only occasionally do I manage to take a good one so I am always pleased when someone else takes over. The better the photos are, the more attention that animal receives when he/she is placed on our website. 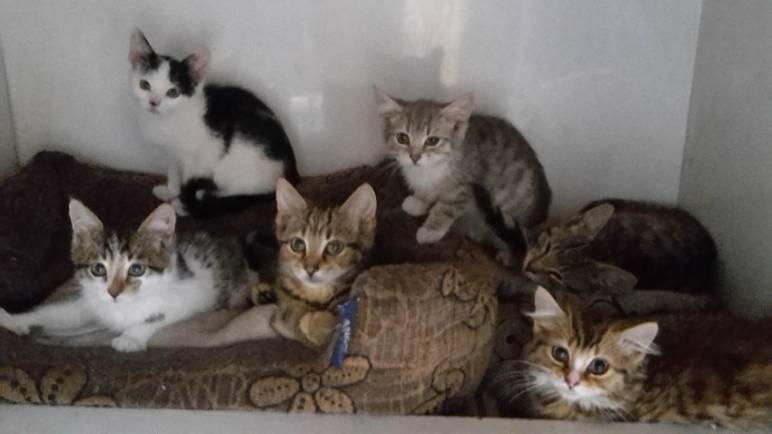 A lovely old  ginger cat has been admitted.13 years old Garfield was abandoned by owners who moved house! Even after all these years of animal welfare I STIll find it hard to understand anybody capable of doing this. How could anyone leave an elderly cat behind to fend for himself? Makes me so angry. Luckily for him Garfield was taken in to a local Vet and a member of staff there contacted us for help (thank you  Sharon) He has settled in well with the other oldies in the Conservatory but he needs a home for the final years of his life and we will try our best to find that special home for him.Gingers are very popular but of course his age is against him.Poor old Garfield , he’s a sweetheart.

Six years ago a lady from Yorkshire was on holiday here and she adopted a dear little dog called Sunny who was a chihuahua crossed with a Jack Russell.. Unbelievably he was an unclaimed stray from the local dog pound, a sweet little dog with a great personality.He had six happy years with Chris and his canine pal Annie,and every year she brought him to visit us. Chris was distraught when she lost Sunny  recently from a tumour but some weeks later she spotted our advertisement for an 8 yrs old chuihuahua called Tim and now little Tim is Annie’s new friend and a new addition to Chris’s family.We hope he helps Chris to overcome the devastation caused by the loss of Sunny and we know that he will be adored and have a great life in Yorkshire.We all look forward to seeing Tim again, he was much loved by all the staff, a really lovely natured little dog.Happy days Tim. 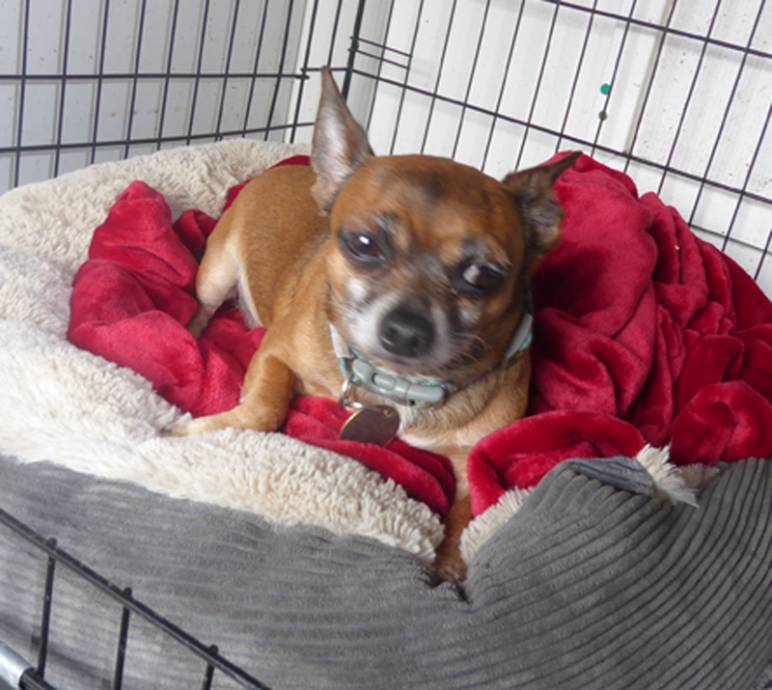 What is going on with Chihuahuas? Seems like there is hardly a time we don’t have one in residence.This is what happens when there is a trend for certain breeds. The animal rescue centres start to receive them in when the people who have spent so much money purchasing them and buying sweet little coats and accessories, suddenly realise that they may be small but they still have the same problems all dogs can have,They can nip, they can chew, they can be dirty in the house just like all dogs and that gorgeous little puppy then  becomes a nuisance. I blame the breeders who  jump on the  bandwagon when they see the popularity increasing of certain breeds. Likewise this trend for cockerpoos and labradoodles etc is starting to have an effect on shelters.Why do people pay huge amounts of money for what are essentially mongrels, yet  try to get that sort of money for a rescue dog at a shelter and that seems to produce a totally different attitude from prospective adopters. It does not make sense to me. 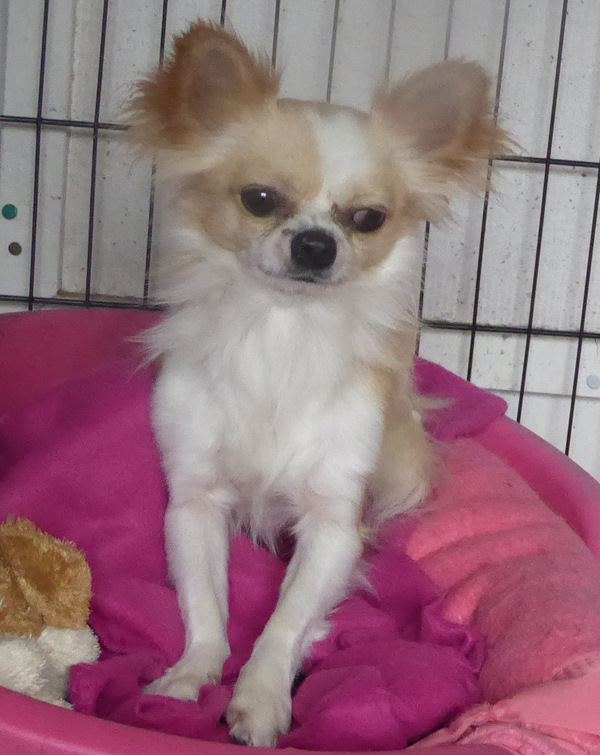 Our current Chihuahua is Olly, an 18 months old longcoated dog. He is here because a new baby arrived in the home and they did not want him any longer because Olly  sometimes  wees in the house. He is generally clean here but toy dogs are often difficult to house train.I remember having a couple of young dachhunds who were a nightmare to train.I can’t remember but I’m not sure they ever did become completely house trained. It seems to be an issue with some little dogs and if the weather is bad and it’s raining, getting them to go outside is a real battle. I’m sure some people reading this will be able to relate to that.