We ended up  having to take both horses as the situation was too grave to leave one behind. 30 years old Melody needs to have the dentist as soon as possible and  as luck would have it, we are expecting  a visit from Andre next week so that will work out well. Melody is unable to eat hay and this may very well be because she  needs a dental. We have other horses who have very few teeth and they receive extra meals to compensate  and Melody will join that little group for extra food and supplements.6 yrs old ex racehorse Blodwen has not been ridden for three years but we may be able to find her a home with someone  experienced who is willing to work with her. The unwanted farm dog from the property came as well. 8 yrs old  sheepdog Nell had also had her life threatened so we could hardly leave her behind.

Most of the puppies have left us now, just  two remain but both are reserved and will be gone before the week is over.  It has been a very hectic time as the phone has barely stopped for the past two weeks and there was a lot of home checking to sort out before the pups could go to their new homes.  This past week we have homed 8 puppies and  five adult dogs and we are still receiving enquiries, some of which we have managed to ‘pair up’ with dogs on our waiting list.

Mathilda pig has an offer of a home on the Wirral with other rescue pigs so if she gets on with them she will have 4 acres of land in which to roam and the company of her own kind. Here’s hoping she doesn’t disgrace herself when she arrives there!  We  are planning to take her one day next week.

Our facebook appeal for  kittens had a brilliant result. First of all Bramble and Thistle found a home after being here since they were born.They were constantly being overlooked so we were thrilled someone nice came forward for the pair which have now gone to live with a family in Anglesey.Then we featured three black kittens which were getting bigger and less adoptable by the week and a gentleman who had been thinking of adopting two kittens until he saw the appeal  adopted all three youngsters! When kittens are here beyond the age of 9weeks, their chances of being rehomed become slimmer,especially when younger babies arrive .All these advertised were around 10 weeks of age and so it was a great day for  us when they were all adopted, though we still have 25 kittens awaiting homes.

Another appeal on Facebook for kitten food brought us several donations from our loyal supporters and helped cut our expenditure for the next couple of weeks.A huge thank you to everyone who donates via our Amazon wish list or personally  donates money or food. We appreciate every single bit of help we receive.It is very hard to raise money in this area and as our longterm supporters know,we have a constant struggle to keep our heads above water. Not for us the luxury of Million Pound legacies or even thousand pound ones!

This week was a very exciting one for us when longterm resident Glen finally found a home. 8 years old Kelpie/collie Glen has been here for 6 years and we thought he would be here forever.He had behavioural issues which have lessened over the years but he still needed a very special person to take him on.That special person turned up this week.Linda who lives in Nottingham has fostered many difficult dogs  and she spotted our profile of Glen on our website and travelled up to meet him with her own three dogs and a foster dog. The dogs all got on well and Glen really took to Linda, yesterday we said goodbye to our boy, with mixed feelings.We were all glad to see him leave us for a better life but saddened that we may never see him again.He has been so much part of the place for so long, his presence will be greatly missed but it  was right for him, we don’t want to see our animals live here for their entire lives.Every animal deserves a home of his own.This has boosted the morale of everybody who works at the shelter.

Unfotunately the foster home for the two  dogs with the skin problems did not turn out to be long term as one of their resident cats refuses to accept the presence of the newcomers in his home.We are therefore placing an appeal for them in The Daily Post.Fingers crossed that will bring them a more permanent home.They have done very well in their foster home and their skin treatment has continued with twice weekly baths in a special solution.They are both looking so much better thanks to the care they have had over the past few weeks  so a big thank you to Gina and her husband for looking after them so well. We love our foster carers, they can be(and often are) the difference between a dog losing its life or having a happy future .

I was thrilled to  learn that  local Bikers are organising an event on 24th September with each rider being asked for a  donation towards Fresh fields here in Nebo.If anyone is interested in attending, the poster will be displayed on the Freshfields website.Already in the United States there are Motorcyclists banding together to help animals and now we have our very own Bikers doing something positive to help. Brilliant,can’t thank them enough.I hope loads turn up for the day.We also received a very welcome £200 from Sian Jones who organised a Quiz night in Pwllheli and our  feral cat trapper Moses and his partner Jackie kindly  held a stall for us at a local event at Adeunant Hall near Porthmadog and raised £53 for the animals here. We have so little help like this, when someone makes an effort for us, we really appreciate it. Thank you, thank you, thank you.

Andre, the horse dentist came today to check all our horses and ponies  for possible dental problems. Vanessa accompanied him to where some of our animals are grazing locally and Andre will be back also tomorrow to do the new horses. It takes him quite a time to check them all and rasp the teeth  of those which need it.  Tomos needs a bit more work so he is booked in for an anaesthetic tomorrow.We have to arrange for the Vet to come out for this.

Andre paid us a second visit today.Vet Rachael came at the same time  to administer the required anaesthetics

Both new horses desperately needed a dental.Ex racehorse BLodwen had teeth so sharp and growing at an angle that would  have caused her great pain when she was ridden with a bit in her mouth. We had been told she was skittish about being touched around her mouth, no wonder. I would be like that too if I was in such pain.   After he had treated Blodwen, his attention turned to Melody and the state of Melody’s mouth  was a great shock to everybody, dentist included ,Andre  said it was the worst he had ever seen! Poor Melody has such overgrown teeth,it was clear she had not seen a dentist for many years and as such had been unable to graze or eat hay for a long time which is why she has lost so much weight.The truth is that she was slowly starving to death.Without supplementary food she would eventually have  died of starvation! As it is, she needs several sessions of dental work to correct the problems in her mouth and even then she will ned to be fed  at least four mals a day to maintan a decent weight.She also has a growth on the inside of one of her hind legs which we need to keep an eye on as this could potentially be serious if it grows any bigger.

I’m not sure if I feel more angry than upset but certainly both emotions are present in me today. 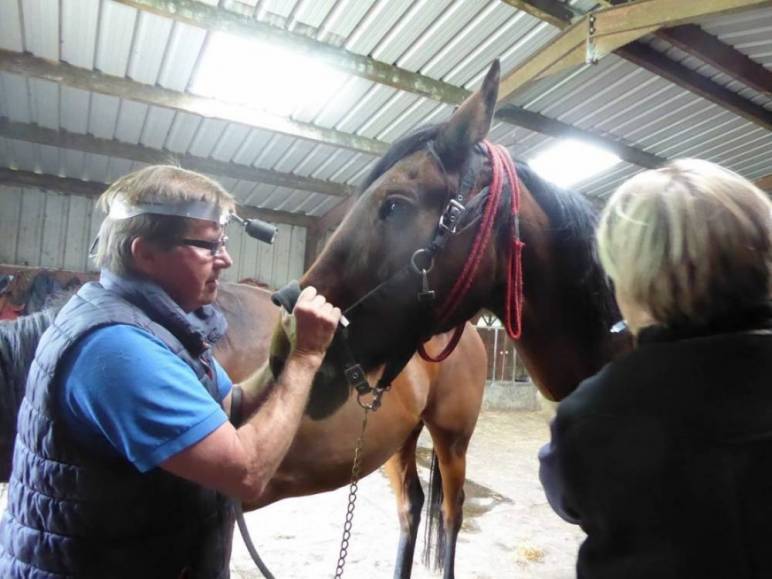 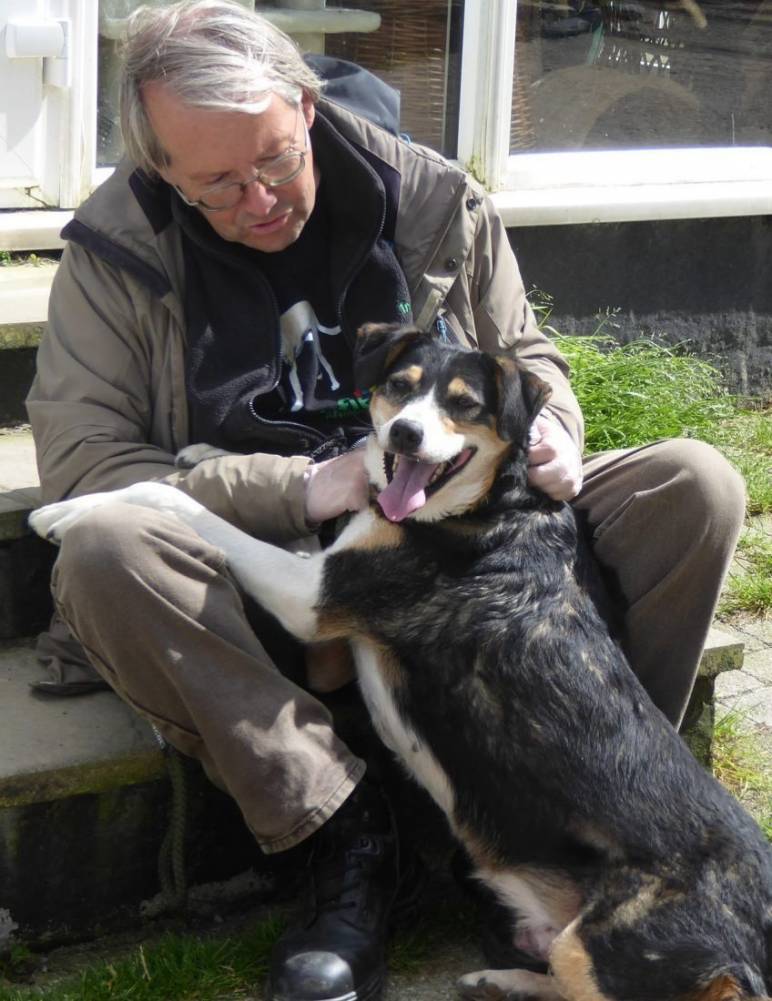 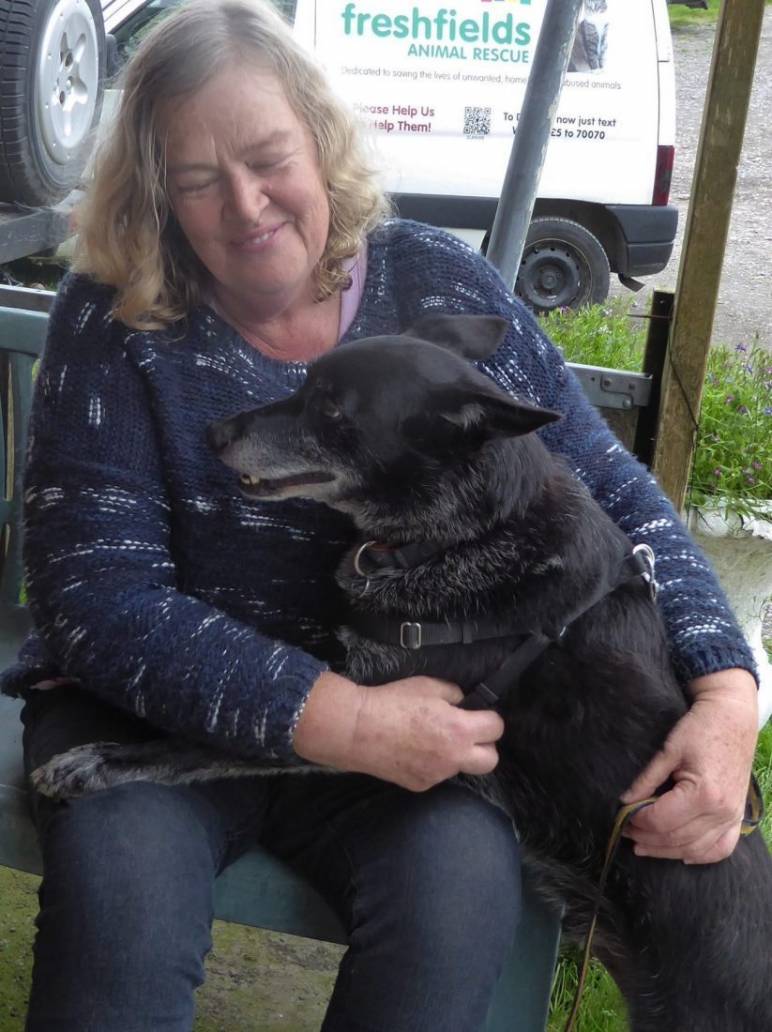