Some of you may remember the blind and deaf collie pups we took in a few years ago, We have another! 5 months old collie/kelpie  pup ‘ Holly’ is totally blind, suffering from rickets and has a slight heart murmer! A sweet little dog, she  is currently in foster care with Deborah our Admin lady and we are looking for a home with another mild tempered dog from whom she can learn her way around and who will give her the confidence she needs. Blindness in collie pups is usually an inherited gene and often is the result of two Blue merle collies  mating.This produces the defective gene and sadly there are still many farmers and individuals who are allowing their merle collies to breed, however as Holly is only part collie her disability may be simply a fluke, either that or there is a  Blue merle pairing in her  ancestry.

Last week our computers have been down, without the internet we almost grind to a halt, so much of the office work is done on the internet. I post regularly on our Facebook page which is wonderful for spreading the word about various pets we have for rehoming ,for advertising fundraisers, for placing appeals for  much needed items such as catfood, newspapers(for litter trays).In fact it is hard to remember exactly what we did before we had the internet. Actually that is not really true.I do remember what it was like. It was very , very hard to find suitable homes without the media we have at our fingertips now. Animal Rescue was so difficult 30-40 years ago. There were many more animals I could have helped had I the resources I have now  and I am sure other animal rescuers who have been involved for the same length of time will agree with that.Facebook puts us in touch with other rescues all over the Uk and abroad, we can turn to other shelters for help or advice and in my own case I have a small number of rescue people to whom I can turn to whenever the going gets tough.I have never had the pleasure of meeting those people but we are all like minded,we care passionately about animal welfare and we all experience the same highs and lows so we truly understand when one of us is struggling with the daily problems we inevitably face.  When there is no internet I immediately feel a sense of panic, not only does it prevent me doing much of my work but it has the effect of making me feel isolated.

Last night, about 7 pm. I came back into the office to take out Molly the office dog for her last walk and the phone happened to be ringing. Apparently a stray cat had been hanging around a nearby village and he/she was crying to get inside this lady’s house. Unfortunately the lady in question had a longtime fear of felines , but she did warm a saucer of milk and opened her shed door so the cat could have shelter.It was bitterly cold last night and when I was told that the cat was blind and very thin, I knew I had to find space somewhere.We have cats and kittens everywhere at the moment so all I could think of was putting up a small crate in the conservatory so I arranged for the cat to be admitted.As it happened Vanessa was still here working with the animals so she kindly put up the crate (I am hopeless at anything practical, even something so simple, I am all thumbs! ). When the cat arrived we could see straight away that he was on his last but he had a warm heated pad to lie upon and that was all could be done for him.This morning he had passed away.Poor old cat.

The internet is working again. We are back in the land of the living once more.

On Sunday, we admitted a young hedgehog who had fallen into a drain.The young man who called us had failed in his attempts to extricate him from the pipe  but with the aid of our cat grasper, he was rescued from his prison, checked over and fed and watered. The little hog seemed no worse for his ordeal although he was very hungry and wolfed down the food we put out for him.At just 300 Kg he was too small to release and so he has gone to spend his winter holidays with a hedgehog loving retired Veterinary Surgeon. If he survives,and we hope that he will, he will be released back in the area he was found which is just a stones throw away from the shelter.

Gypsy, the elderly pony is safe now, he has been signed over and will be moved to his foster home very soon.We are really pleased that he is one step nearer to his total retirement.No longer working at a riding school, just days of doing his own thing,just what an old pony needs. I will post some photos when he arrives at his foster home. 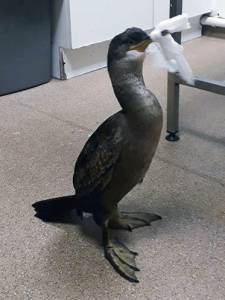 Cattery employee Gail  went for a walk this week with her dogs and found herself involved with the rescue of an  exhausted and starving Cormorant (see photo) .The recent  heavy winds have resulted in many birds finding themselves blown against buildings or trees and injuring themselves.  Two bluetits were on the ground by my garden shed though both appeared to recover and fly off later in the day and the poor Cormorant also lived to see another day after his rescue. That’s the thing about people who love animals, often their days out(and holidays) are ruined by seeing animals in distress.At least here in the Uk we can physically do something about most situations.

It has been snowing on and off all day and is bitterly cold, humans and animals alike are struggling with the cold. I hope it doesn’t last. It may look pretty but it’s no fun  for those working outside in these conditions and the poor birds are so hungry; there are  so many starlings  now descending on my bird feeders,I am going through sacks of bird feed at an alarming rate.The horses need plenty of hay in their fields because they cannot access the grass beneath the snow so it is hard work for the staff when we have this bad weather.There are so many dangerous icy spots around the stables which we are covering with copious amounts of straw.We are scared of one of the horses slipping and breaking a leg so  although it makes  a  mess later,it is a small price to pay  for  the welfare of the horses 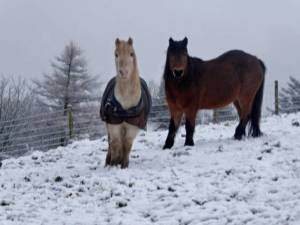 We had our staff Christmas lunch this week and 11 of us descended upon the Antur Waunfawr café   and I feel sure the other diners were glad when our noisy bunch left. It was nice also  to see two  ex colleagues Veronica and Penny who joined us for the get together.It is rare that  we all get together socially so it was a very pleasant excursion.

Last week we were so pleased to reunite cross mastiff ‘Rufus’ with his original owner that the entire workforce came out to see him go. There were tears in the eyes of most of us as we watched the reunion.Rufus  who had been admitted over a year ago due to  unavoidable  circumstances within the family, had been rehomed soon after but  returned a few months ago, was completely overjoyed to see his ‘mum’ again and  almost knocked her over in his excitement. We were so thrilled  when she contacted us again to say that she was now able to  have Rufus back and we hear he has settled back happily  in his old home. Happy Christmas Rufus.

I cannot believe that kittens are still being admitted at this time of year but we still have our pens full in the kitten room.Happily many are being adopted although the usual  shy and black  ones are once again being left behind.That scenario  never changes.

The snow has turned to ice in some parts of the shelter and there is always the worry a horse will slip and break a leg so copious amounts of straw are being used to put on the areas where they walk to come and go from the stables.It does mean a  lot more clearing up but it is the best we can do to prevent an accident occurring.