We have just taken in an elderly ginger and white  cat whose owner is in a hospice. Poor Lester has been in an empty house for nine months and in spite of a very good neighbour helping to care for him, he is clearly in need of  more tlc. He appears to have developed a secondary infection from fleas and  parts of his body look sore and inflamed.A very relieved and grateful  neighbour handed him over to Fresh fields cattery manager Jacqueline for the next stage of his life. This  will include a visit to our Vet, treatment for his skin and then  when he has recovered, he will be placed for adoption. If we are not fortunate enough to find him a home, he will remain with us for the remainder of his life, though I am optimistic about his prospects. He is loving the attention he is receiving now, poor old boy.

There are calls coming in now about cats having given birth to kittens.Most babies are aged about two weeks so in another month it looks like we will have an influx of kittens ready for rehoming.We have homed two of the kittencats we took in so just the dark tortoishell and the black and white are still available. We need these two to in homes before the young kittens arrive or they will not stand a chance of being adopted. Once visitors see the tiny ones the older cats tend to be ignored.

John and Mei were about to set off  off to collect two dogs from the Dog Pound and take them for their first vaccinations, when a call came through from the Kennels to say that  one of the dogs  we were collecting, a female collie,  had given birth to six puppies!  Her long coat had hidden the fact that she was heavily pregnant. We decided that it would be best for her that we leave the move for at least one more week. John and Mei  were just  climbing  in the van to  make the journey to the Pound Kennels when  the telephone rang and a distraught gentleman whose dog had rejected her only puppy asked if we knew of a nursing mother dog! .My initial response was of annoyance that yet another person had needlessly  bred from a family pet but the  main and pressing issue was the welfare of the pup and thanks to the unclaimed stray collie, there was a chance we could offer help to the little pup. As soon as the man turned up with the (corgi) pup they set off and sometime later we heard that the collie mum had taken to the little one  and was nursing him along with her own family. A good result. When the pup is weaned he will be going back to his home for good. The second dog  is  a cross Labrador youngster  we have named Marley and he  is currently in boarding kennels waiting for a home.

At the moment  we are hearing of so many young dogs needing homes.They are all aged between 6 -7 months and  many are likely to have been xmas presents .This is what often happens -  when the pup grows bigger and livelier, out it goes!  It happens every Spring without fail. So annoying and so unfair on the pups.They come in without having had  any training and most are not even vaccinated, never mind neutered. When the owners are asked why they are parting with their dog, they invariably tell me that the dog is too much to handle.For that you can  take it that they have not put any work into the training of their pup and then they are surprised to find that their pet is behaving badly, or in some cases , simply just being a typical youngster! What does it take to get the message over to people that if you take on a puppy, you need to take responsibility and action to train him/her ?Mind you, and this may spark some debate ,but in my opinion, those same people  are unlikely to put anything  into the training of their children either.  Don’t get me started on that topic!

Last week there was a farm animal sale at the local Saleyard in Bryncir and later that same day, two cockerels were found on the road nearby.We have given them a temporary place of safety but we are not really set up for poultry and so I appealed for a home for the pair.It wqas successful and on Friday the’boys’ are going to a new home in South Wales.  We will be taking them to Aberystwyth and from there they will be collected by a volunteer form The Animal Team network , taken to Carmarthenshire and then collected by another volunteer who will take them to their future home.This network is wonderful, they help rescue centres with homecheckers and transportation all over the UK. I can’t praise them enough for their efficiency and  enthusiasm.Their volunteers have been an invaluable help to us when we have been unable to find help ourselves. A word about these cockerels, they have won over all the staff with their nice natures and their beautifully marked plumage.Mark tells me that they are Golden Cuckoo Peking cockerels(bantams)Mark who works with the horses is a mine of information about nature and  farm animals, having kept many as pets over the years.

We are having to say goodbye tomorrow  to our old mare Callie whose health  problems have increased and we do not want her to start to suffer.At the grand age of 43 years, she has been a wonderful horse, healthy and active  but this past year she has really shown her age , both in appearance and health. We are dreading tomorrow and worried about her pal Sally too.

Photos: - Lester and his poor sore body. Our handsome cockerels with Mark. Callie with her guide pony Sally. 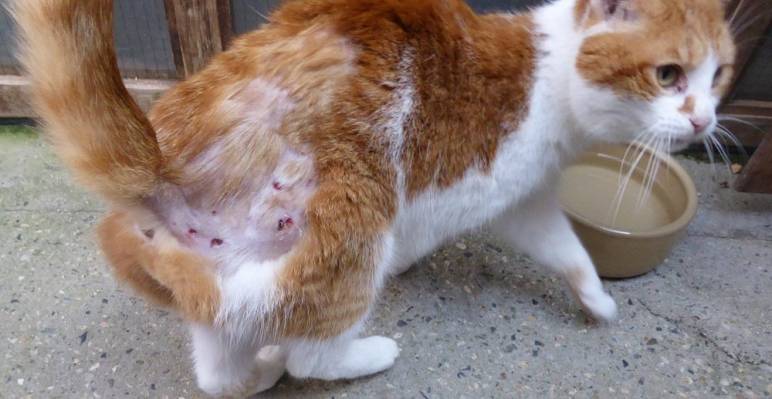 Photos: Jenny and Micky (my cat lookeylikeys) Buster and snowflake.