Abandoned in the rain.

7.30am, it was dark , cold  and heavy rain was lashing down when Vanessa, the first of the staff arrived to work on Monday morning. The first thing seen  in the headlights of her car  as she turned into the path leading to the shelter entrance, was a small plastic cat carrier and the sodden remnants of a cardboard box next to it. Fearing that animals had been dumped there, she climbed out of her car and as she did so a small dark shape shot past her into the fields next door. In the carrier were three wide eyed and very frightened kittens so she knew that the box was likely to have  contained the mother cat. After the kittens were settled into a spare catpen, attempts were made to find the missing mum, and a cat trap was set up in the place where the animals had been found. All day we checked on the trap but it was not until evening that she was spotted in the field adjoining our property. Mei, who lives in walking distance to the shelter, made several trips to check the trap  later that evening but it was not until her last trip at midnight that the trap did it’s job and mum was caught and safely transferred to a warm pen in the cattery. Never let it be said that the staff who work here do not go far beyond their daily duties when an animal is in need of help. 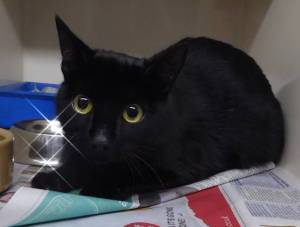 It  annoys and upsets  me when animals are abandoned here, anything can happen to them when they are left by the roadside and I fail to understand why  the driver(s) cannot simply drive up the track to the shelter  itself and hand over their unwanted pets. They have come this far, so what is an extra 3-400 yards to ensure that their animals are safe?  I will never understand the mentality of those who just dump the carriers or boxes and drive away. Over the years we have had similar incidents and usually with cats but not all were lucky to be found, most were never seen again. Thank goodness this little one stayed close to where she was left.Mum and babies pictured here 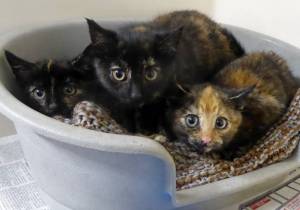 I  recently received an email  from a very disappointed vegan, criticising the fact that our website ,and therefore the charity, did not promote veganism as opposed to vegetarianism. Freshfields is not a campaigning organisation but because we are an animal welfare charity, we do try our best to make people aware of the cruelties behind both the meat and dairy industries. That said, my personal opinion is that by severely criticising those who have not yet reached the decision to leave out  animal products from their diet, there is less chance of  them  ever doing so. Many years ago (I was 19 yrs young)   my mother and I tried to persuade my sister to give up meat and she was steadfast in her refusal;  the more we talked about it, the more  annoyed she became so in the end we  were forced to give up and leave her to it. Some years later she became vegetarian of her own volition. Actually it was the original channel 4 screening  of ‘The Animals Film’ which changed her views  and that of  thousands of others who also   became vegetarian after watching it , and no wonder! It showed graphically every type of animal cruelty from the poor elephant who died so Eddison could test his electricity theory to intensively farmed animals and those suffering daily in laboratories. A shocking but true depiction of the atrocities perpetrated upon the animal kingdom by a supposedly more civilised and intelligent species!

Not everyone can make the jump from committed carnivore to immediately eschewing all animal products from their diet  and it is unrealistic to expect that. By promoting a meatfree diet, , those who show interest and are motivated to become vegetarian are often likely to become vegan once they have taken  the first step towards a cruelty free lifestyle. Therefore I stand by our more gentle  stance of  promoting a meatfree diet to the animal lovers who read our website and follow us on Facebook in the hope that some will take the facts on board and eventually start to lead a life which does not involve the mistreatment and  slaughter of any animal species.

Finally on the same topic, when I became vegan so many years ago, there were no ready meals available in supermarkets, the only vegan magarine was  a Jewish margarine  called Tomor which looked and taste like lard (there are now several options available in health food stores and supermarkets) one brand of soya milk , a  wonderful product called Sosmix (for some strange reason this popular veg food has been taken off the market!) and my diet left a lot to be desired. Nowadays there are  so many  healthy  choices, there are vegan cafes and restaurants opening up everywhere , supermarkets are stocking many vegan foods and finally it has become an accepted diet in todays society. My hope is that it is not just a fad and will remain a popular diet with those who want a healthy and cruelty free way to live.  In my (late) teenage years, if I could have had a 'normal' meal like this one I had at Voltaire vegan restaurant in Bangor, I would have been very happy indeed. 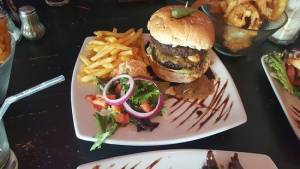 There seem to be lots of elderly dogs looking for homes at the moment. We have 13 years old Bichons whose owner was moving to a  bungalow with  an unfenced garden, a  14 years old unwanted farm collie  and then we have an 8yrs old  and 13 years old  Bedlington crosses.  The latter were working dogs at one time but a relationship breakdown  made them and their owner homeless. It is so sad for old animals when they find themselves in a strange environment although lurchers Alfie and Laurie seem more than happy to be away from their old life ! 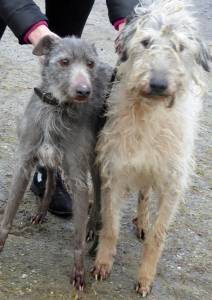 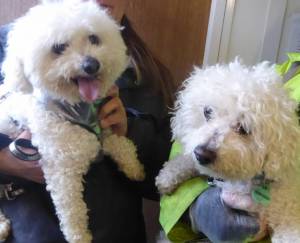 Date for your diary – we will be holding another sponsored dog walk in Anglesey  on 27th May. The last one was very successful thanks to the help of dog trainer Ray Owens who runs Packleaders in the Holyhead area.  Sponsor forms will be available soon.