A new Home for Cody and for Blue the Bunny

2nd May:
The little pig did not arrive here because soon after Gary from the Liverpool shelter went to collect her, she was offered a home. The home in question already has rescued pigs including our own Mathilda(who was abandoned in the Wrexham area) and has recently given shelter to the heifer with an injured leg. As the home was located on the way to North Wales, Gary stopped off and introduced ‘Iggle Piggle’ to her new family. A great result and although everyone here was looking forward to meeting her, our main objection is always to find the best homes possible for our rescued animals and this was a wonderful result for one little abandoned piglet.

Spring is here and with it comes the problem of abandoned or injured baby birds. At the Wales shelter we have no facilities for birds but we try to help as much as we can before handing over to a specialist.Recently we have had a couple of ducklings ,a badly injured gull and a couple of garden birds.Those which survived went to a lady in Anglesey who has been rescuing and caring for injured birds for many years, however she is officially retired though does help us out as a favour . There is nobody else to take over from this lovely lady and we have neither the facilities nor the experienced staff to do it ourselves. Of course our Liverpool shelter has a wonderful wildlife section but that is a good few hours away from us, and we really do need someone local. Does anybody know of such a person?
Speaking of birds, I saw a Mistle thrush for the first time in my life ! I know it’s hard to believe but I really have never come across one. I was in the field with my dogs when I heard a strange rattling noise, similar to the sound of a football rattle.Then a beautifully marked bird hopped on to the nearby wall before flying low over my head. I had no idea what species it was and had to get an opinion from an expert (Alan and Ruth from The Biggest Twitch birding company) It was quite embarrassing to discover it was a ‘just’ a thrush though admittedly they are not as common as The Song Thrush and the numbers are currently in decline.(I am just trying to justify my inadequacy as a bird watcher)

A volunteer collected 3 tiny staffie/collie puppies from an owner who has ‘had enough of them’.At 4 weeks of age they are far too young to leave the mother but she is adamant that they have to go straight away as she has a new baby and cannot cope with them. Rather than risk them being given away at this tender age,I agreed to take them but discussed the welfare of the mother dog.She agreed to take her to her Vet for an injection to prevent her producing milk and promised she will have her spayed as soon as possible.Ex staff member Paula agreed to foster the babies and I know they will thrive under her care so Cattery Head Jac dropped them off on her way home from the shelter. 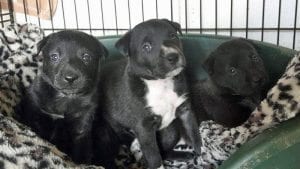 4th May:
What a day. There are staff issues to deal with which are not my favourite thing, another mother cat with new born babies is found locally and is admitted(they are gorgeous)a man rings to say that he is moving house TODAY with 2 cats to get rid of! Are they neutered? Of course not? Are they vaccinated or microchipped? Do you need to ask? How is it that so many people move house yet ring us only on the day before or on the actual moving day. I have never know anyone who has had to move that suddenly, have you? Deborah asked him if he can give us a donation to help neuter the cats but he says he cannot afford to do so.Dilemma - we have the space for these unfortunate cats but we lack the funds to take them on.Neutering, vaccinations and microchips cost us around £100 per cat. We have to think of our own financial situation but I relented and tell Deb to say we will take them.I am worried he will leave them behind when he moves and in the end we will be worse off when they get brought to us in a few months with litters of kittens! He is asked if he can he bring them to us – No he says, he has no transport! Grrrr. A gentleman from Mid Wales rings with a terrier/dachshund he cannot keep and we agree to take the little dog , one of our supporters collects a dog from the Pound where his time is up and his foster person is rung to come and collect him. Then a call comes in from a woman who brought a new pup into the home and whose Jack Russell has killed it! How can I find a home for a dog like that? It is hard enough finding homes for those with excellent natures. I have to be honest and explain that passing the terrier on to someone else could very well lead to another tragedy.She takes it well and I hope she will do the right thing.I have never had an issue with taking on an animal with problems but nowadays there are simply too many animals needing help and as we have no kennels of our own to use, we have to draw the line at those who are likely to cause harm to one of our own residents or someone elses beloved pet. It leaves me feeling bad for the rest of the day and the mild headache which has been with me since this morning, develops into a full blown debilitating one.

8th may:
The Wales shelter is situated on Lon Pant y Gog, which in English translates to Cuckoo Dip lane. A lovely name and very appropriate as each spring we have cuckoos nesting here.One year a cuckoo egg was left with our family of swallows in the barn and it was quite a surprise to see such a large bird leaving the nest but I am sure it was more of a shock to the swallow parents! I have always wondered why Cuckoos leave their eggs in the nests of other birds, there must be a reason for it apart from that they can’t be bothered to rear their young.Does anybody know? I must look it up on the net. This year I have been waiting to hear the first cuckoo but he has only just appeared the past few days. I hope he can find enough food; the favourite food of cuckoos is caterpillars and I have seen hardly any this year so whether they have turned into butterflies already and flown or there are just not many about I am unsure.

Yesterday(Sunday )was a great day because we rehomed Cody a 4-5 yrs old Staffordshire bull terrier who came in from the Dog Pound some months ago.Poor Cody was very unhappy in kennels so I placed an appeal for him on FB. Nearly 40,000 people viewed the post and 310 shared it with friends. One of those kind people who shared hit the jackpot when they shared with a couple who had lost their 18 yrs old Staffie. They travelled from the Forest of Dean to meet Cody, fell in love immediately and now this lovely friendly dog is beginning his new life with a new family. Also rehomed was French Lop rabbit Blue who had been here a year.He has gone to live with another rabbit who was fretting for her companion who had recently died.The pair became pals straight away after their introduction on neutral territory(one of the stables) . Blue had also lost his companion and when he met this new bunny he immediately raced up to her and started grooming her.Fantastic result for Blue. Altogether it was a very happy weekend. 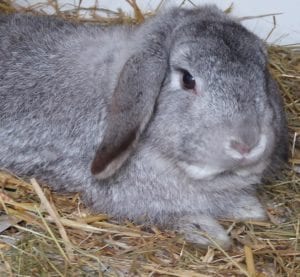 We have had an injured pigeon brought in and a call about 7 abandoned ducklings. It may be that mum has just flown away temporarily and will return but other birds were attacking the ducklings so the finder thought it best to remove them to a place of safety.We are waiting to hear what has happened and if the babies need our help.It is fact of life and nature that out of a clutch of ducklings, mum will be lucky to rear just a couple to adulthood.There are so many predators waiting for a chance to pounce and I fully understand how people feel when they see these little helpless ones being attacked but it is natures way of eliminating the weak .Having said that I would find it hard myself to turn my back and watch their plight without helping.

We need your help. Tickets are now ready for sale for our 60,70,80,s BBQ fundraiser evening on June 23rd. Please ring the shelter if you can sell any for us: 01286 479711.There will be free overnight camping available for those who want to enjoy a drink or three without worrying about driving home. It should be a fun night, we are all looking forward to it, come along and join us.

The Blaenau Ffestiniog Sponsored Walk raised a wonderful £913 for the shelter.Thanks to all who participated with their dogs and raised these much needed funds and to Roger from The Madog Dog Walks Group who led the walk and helped organise it.Much appreciated Roger.

Oh No! Handyman and 'part of the furniture' John has announced that he feels no longer able to do much of the DIY work here which includes a lot of manual labour including fencing.He will still come in but for less hours which means we are now in dire need of someone to step into his shoes with the heavier work. is there anybody out there who could help us with our fencing? It is a hard job and requires a certain level of fitness. 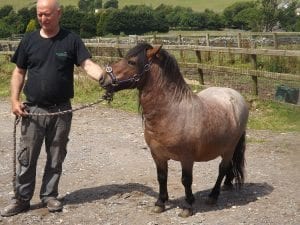 Ps: the 2 young unneutered cats which we were expecting , failed to turn up last week and of course no call was made to us by way of explanation(surprise surprise) but a few days later he rang , he managed to find transport and they arrived on Saturday instead! I should be well used to such ignorance but it still makes me mad that some people have no manners or consideration.Their brains seem to fail to compute the fact that the space we had made for their pet(s) may be used up when they turn up days or weeks later than arranged. he was lucky that we still had the space;Alfie and Gizmo the cats are lovely youngsters and should find homes fairly easily once they are neutered. 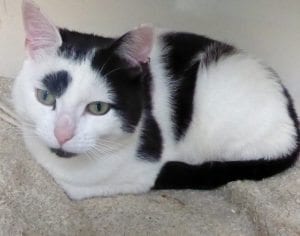