After 2 years absence from my garden ,I was delighted to observe four goldfinches on one of the seed feeders. They add a very welcome splash of colour at this time of year. Currently the feeders are being emptied at an alarming speed by the nesting rooks which are now venturing into the garden  for the first time. Usually they are too shy to come anywhere near the house but between four and five are  here every day  and my  bird food bill is rising by the minute.

A decision was made to neuter the elderly cats Stan and Ollie because it was felt that they would have no quality of life unless this was done. They have recovered well and soon they will be able to experience the freedom of the shelter or even perhaps find a home of their own. Had they not had the operation, they would have  been confined for the remainder of their lives. On balance we felt neutering had to be considered . It was not an easy decision to make but we believe it was the right thing to do in the circumstances.

An orphaned litter of  four new born kittens were admitted after their mother was found dead on the roadside. Barely a week old, they have been adopted by lovely maternal Wanda, a mother cat here whose  three kittens were almost weaned. Mum and both litters are doing well. Not all cats will be happy to take on a second batch of greedy babies but newborns stand the best chance of survival if they can be fostered by an already lactating mum. Wanda is a marvellous example of maternal contentment. 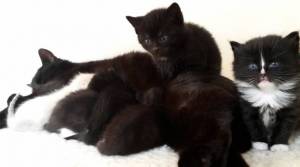 Our most recent admission are twin lambs Thelma and Louise. These adorable 4 weeks old babies are  orphans and have been hand reared by a member of the public.  Our staff have now taken over their bottle feeding and we will be looking for a pet home for them when they are a little older and more independent. Whenever we admit rescued lambs, I cannot help but think of the millions of lambs which lose their lives daily to provide food for human beings who already have so much food at their disposal.I cannot see the difference between a sheep and a domestic pet. Both domestic and farm animals feel pain, they both experience fear and they all have the ability to show affection and love to anybody who treats them kindly. I can tell  by the Freshfields Facebook page how little interest there is in the plight or rescue of farm animals. In comparison to the interest shown when we post stories about dogs or cats, there is a huge difference in interest and comments made. Even the horses fail to garner much attention.. When I moved to this rural location I could see that many people were horse owners and believed that we would do well with support for our work with horses .Oh how wrong I was! We receive less support for that side of our work than any other. When I first moved and was still optimistic I contacted all riding schools within Gwynedd  and asked for their help by either taking one of our collecting boxes or holding an occasional fundraiser eg: a pony club event or sponsored ride etc. Not one even bothered to reply. It is so disheartening. 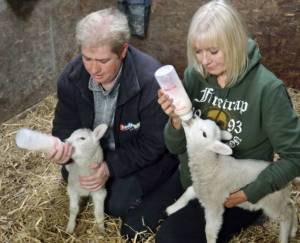 A bit of positive news - the insurance have paid out for the stables to have the roof replaced. Thank goodness. It will cost almost two thousand pounds so the pay out is a great relief.

We were delighted to receive photos of an elderly dog we rescued several months ago. Scruffy had been a ‘Pound’ dog on Death Row  and in spite of attempts by kennel staff there to find him a home, nobody wanted him. We agreed to take him on but  after he had some decaying teeth taken out,we became concerned about his behaviour and worried that he had suffered brain damage. Our concerns were unfounded, he simply had an infection which was treated with antibiotics ; his condition improved daily and eventually we found him a  wonderful home where he is a much loved member of the family.  He is pictured here enjoying a rest after  his first camping trip with his new family. 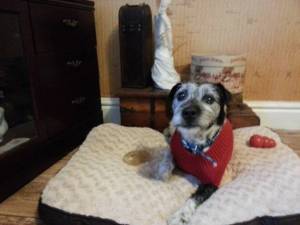 Local dog walkers and supporters please  don’t forget our Sponsored Dog walk  through the lovely  Penrhos nature reserve in Anglesey on 27th May at 11am.  All dogs will receive a special rosette. Sponsor forms from the shelter or from Ray Owens who runs ‘Packleaders’  in Anglesey. Email him for a form and more information at :-  : Packleaders115@yahoo.co.uk. Forms also available from many of the Vet surgeries in Anglesey and Farm and Pet Place in LLangefni.

Photos: Main Photo of Wanda. Lambs being bottle fed by Mei and me on their first day at the shelter. Old Scruffy, and Wanda and her foster babies with a couple of her own offspring looking on.