There's plenty of good news to share this week.

We're delighted to see the hedgehog, injured by the strimmer, now making a remarkable recovery. The future is certainly looking rosy for this little guy as he'll be released in the near future. Talk about second chances! 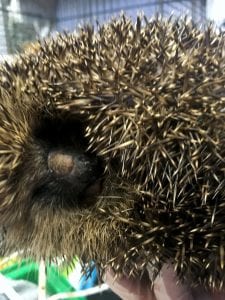 Recently, the wildlife unit was bombarded by phone calls from concerned members of the public who were all witnessing a mother shelduck walking her large brood across dangerous roads, in a busy residential shopping area. The drama unfolded throughout the day, as four people, individually brought five ducklings in. Sadly, the rest of the brood were attacked by magpies and crows and killed by cars. It seems that the mother was attempting a two-mile walk to the mudflat estuaries where shelducks like to feed. 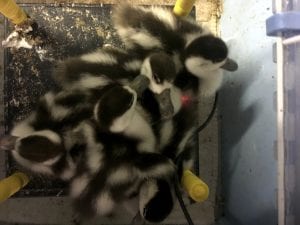 Happily, the remaining five ducklings are thriving....touch wood! Funnily enough, another shelduck arrived, although not a sibling of the initial brood.  The ducklings can be seen perching on and under a Rentacoop heated chick brooder, these are absolutely vital to our success with ducklings and other chicks.

There is now a run on juvenile blackbirds, five in all, that have all been attacked by cats. We also have a collared dove chick with an injured wing. Collared doves are very popular here as they are so calm, gentle and placid. They really are the perfect house guests!

We also have a crow, that looks more like a magpie, as a vitamin deficiency has resulted in it having white feathers. This bird will have to moult and re-grow its feathers before it can be released, so could be in the rescue for twelve months. 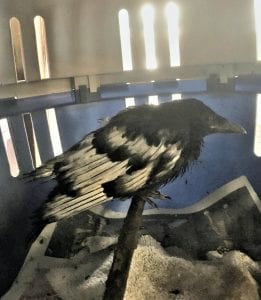 The unit now sounds like Springwatch; everywhere there is chirping, quacking, warbling, and chirruping, especially when the staff arrive first thing in the morning, usually with the young, sick or vulnerable critters they have cared for overnight. Given the wet and windy weather we've had, no birds have been released, so here's to some better weather soon!

At the moment we are in need of more of Rentacoop heated chick brooders, we are desperately short of towels and bird food. We also urgently need dried and live mealworms, seed, and suet to feed our chicks and juvenile birds, also cat biscuits for our hedgehogs, no fish flavours though, as hedgehogs won't eat anything fishy.   Please take a look at our Amazon Wishlist HERE

A huge thank you to anyone who can help.

Out and about this June

This is a good time to look out for moths as some do fly during the day.

Worryingly, two-thirds of common moth species have declined in the last forty years and since 1914 there have been fifty-six moth extinctions. There has also been a decline in the numbers of bats over farmlands which is directly related to decreased numbers of moths.

If you want to encourage moths into your garden and help bats, plant lavender and honeysuckle, and leave a wild area with a pile of fallen leaves and plant debris to allow moths to hide from predators.

that a shrimps' heart is in its head,

that slugs have four noses,

and that roe deer are the only indigenous deer in Britain?

Also, check out this free app if you ever need to identify trees, plants insects or mammals. It's so easy, you just let the camera linger over the subject and it instantly provides an answer on the screen.

Always remember to seek advice from the wildlife staff before bringing an animal to the rescue. If an animal is injured, please take it to a vet as we don't always have a vet on site. Most vets treat wildlife for free.