Answers to all your questions. 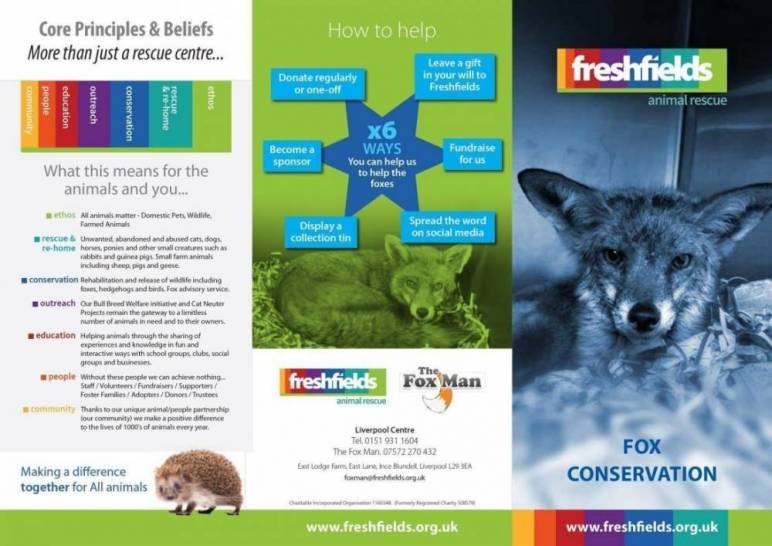 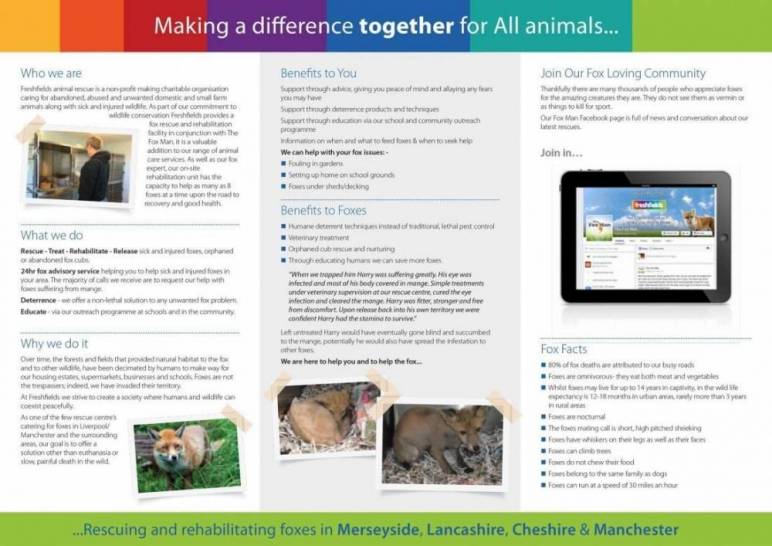 Q. When did this unit open, and what made you start caring for foxes?

A. The unit officially opened in December 2013. The unit is run by our very own Fox Man who previously volunteered with the Fox Project, a fox rescue based in Kent, which was also a franchisee for the non-lethal fox control company Fox-A-Gon. Once the Fox Man started working at Freshfields it seemed the natural thing to make use of his knowledge and experience and start up a fox unit here, as there are very few rescues in the area that deal with foxes.

Q. How do you hear about foxes that need help?

A. Most of the calls that come in are from followers on the Fox Man facebook page https://www.facebook.com/freshfieldsfoxrescue/, but some hear about our project through other rescues and the RSPCA.

Q. What is most commonly wrong with them?

A. Nine times out of ten the foxes that come in are suffering from sarcoptic mange, a mite that burrows into the skin of the fox, causing immense itching which results in skin irritation, infections, fur loss, and even death if not treated soon enough. Death is commonly a result of dehydration as the mange mites spread all over the body. In extreme cases a fox suffering from mange can have absolutely no fur, although this doesn't mean it is too late for treatment. In past cases we have dealt with foxes with other injuries such as broken legs/jaws, and one case in which a fox was caught in a snare.

Q. Do you always release foxes after treatment?

A. Unless a fox is too tame to be released back into the wild (in which case we would seek a suitable sanctuary for them) all foxes that are treated are taken back to wherever they originally came from and released.

Q. How do you treat these animals; foxes are wild animals aren’t they?

A. Medicine is given in food where possible, to avoid physical contact with the foxes. If it's necessary to inject a fox with medication a towel is placed over their head, this normally makes them stay still. Only in rare circumstances is a fox sedated when being checked over by a vet, in order to check for breaks/fractures or if an X-Ray is required. When foxes are in the unit they are only feed/cleaned twice a day to reduce human contact with them.

Q. Do you ever admit orphaned cubs?

A. We have had many fox cubs come through our doors. If a cub comes in alone and we have no other cubs in to mix it with, we will contact other rescues across the country to see if they do. We need to ensure the cub remains wild and doesn’t imprint upon its human carer (imprinting is when the animal that is being fostered forms a bond/trust with the person who is caring for it. If this was to be the case with the fox cubs, once released they may associate all humans as being friendly, which unfortunately is not the case and could ultimately result in them being put in danger). Cubs are very sociable so mixing them with others prevents them from becoming lonely, and play with other cubs is also important as it teaches them vital techniques that will help them survive in the wild.

Q. What happens if you can’t release a fox back to where it was collected?

A. We always release a fox back to where it has come from, as they are territorial animals. To release one elsewhere runs the risk of putting a fox in to another fox’s territory, which would result in a territorial war. Also releasing a fox in an unfamiliar territory could cause a fox to struggle to find food and survive. When a fox is removed from its territory it will not be long before another fox moves in so even if the area is dangerous or if the fox is an unwelcome resident, relocating the animal is not a solution.

Q. Foxes are pests, will you collect and put one to sleep if I ask you to?

A. Foxes are not considered vermin by DEFRA (Department for Environmental and Rural Affairs), despite what some people claim. We would not put a fox to sleep if requested, as we believe that would not only be cruel, but pointless. Removing one fox from a territory simply leaves the territory open to other foxes from the surrounding territories to fight over it. This could result in a worse problem for the caller than coexisting with the original fox. The last thing people want is foxes fighting over whose territory their back garden is!

Q. Do you neuter or microchip foxes?

A. There is no need to neuter foxes as they control their own population by forming territories - the size of which will be dependent on food availability. A lot of food means a smaller territory and therefore the potential for there to be more foxes living in smaller sized territories. In any case, foxes are an important part of the ecosystem as they help to keep populations of smaller animals like mice, rabbits and rats, who are not self-regulating, in check. We never microchip foxes as in order to utilise the information on a chip you would need to capture the fox again, or recover the body if it dies. In most cases its unlikely we will ever encounter a fox we have previously caught so a microchip would be of no value.

Q. Can I come and see the foxes?

A. We don't allow members of the public to come and see the foxes simply because they are wild animals who are very nervous around humans. While we are treating them they must have as little contact with humans as possible. This is why we restrict feeding and cleaning to just twice a day.

Q. Why do we see more foxes around than we used to?

A. As we are destroying more and more of their natural habitats to build houses, it is only natural that we see more wildlife moving back into the areas they once inhabited. What used to be areas of forest rich in wildlife are now housing estates. Luckily, foxes are thrive in urban areas having adapted well to the change.

Q. How do you collect a fox/release a fox?

A. In most cases we use a cage trap, which is left in someone's garden so they can check it regularly. If a trap cannot be checked every hour we ask that it is ‘unset’ , until a time that it can again be checked every hour. Once trapped we put the fox into a carry cage, and they are then transferred into the unit at Freshfields. We then use the same type of carry cage to release them back home.

Q. Are they dangerous to work with?

A. The only time a fox will attack is when cornered and fearful for its life. Doing fox rescue does mean that you sometimes need to corner the animals in order to provide treatment, but any bites are minor and serve as more of a warning. Fox staff have been bitten but the fox has always just let go straight away and tried to make a run for it, or retreated to the back of the cage. Even vets agree that feral cats are more ferocious than foxes.

Q. Do you have more foxes on site at certain times of the year?

A. Spring time is when cubs start coming in. Other than that the calls we get about foxes can vary from week to week. As the days get longer and weather warmer, more people tend to go into their gardens and notice foxes, so there is a potential for more calls to come in around Spring/Summer, although this year (2015) we have had a lot of calls in Autumn and Winter.

Q. Does fox hunting help to keep fox numbers down?

A. On the contrary, people associated with fox hunts have been known to encourage foxes by using artificial earths, as well as leaving food out for the foxes in areas they know are going to be hunted. There are also cases where fox cubs are found in sheds near hunt kennels. Think about it: no foxes, means no fox hunt. People who hunt have no interest in keeping fox numbers down at all. From a scientific point of view, studies undertaken during the Foot and Mouth crisis show that there was no significant increase in the fox population when no fox hunts were carried out. When you consider that 80% of foxes are killed by being run over by vehicles, the number killed by hunts is really a drop in the ocean by comparison and by no means a form of fox control.

Q. Should I feed foxes?

A. There is no such thing as a starving fox. They are quite resourceful and are intelligent enough to plan for when food is scarce by burying their food for the times when there is none. This is why, in most cases, if you throw a large piece of food out for a fox it will run off with it rather than eat it in front of you. If you do decide to feed foxes make sure you don't do it by hand, you should leave food out of doors so they don't associate it with people. Also only give small amounts so as not to make them dependent on you - if they have a decent food supply from hand outs its likely they won't travel as far to find food, thus reducing their territory size. If there comes a time when you cannot feed the fox, it may need to travel further out to find food and it could find it has lost it’s territory to another fox.