Noodles originally came to us in 2012 after his owner was moving house and couldn't take him.  He found a wonderful home with long term supporters of the rescue, but sadly he developed separation anxiety and could not cope being left alone during their work hours so came back to us in 2013. Thankfully this family are still able to offer Noodles respite periods at their home, mainly during weekends so Noodles is generally only in kennels throughout the week.
Although this set up seems to work well for Noodles we would desperately like to see him settled in a permanent retirement home.

In kennels Noodles is generally quiet and withdrawn, he merely tolerates the staff, however as soon as his foster family come to collect him each weekend he turns into an excitable puppy! He squeals and pulls to get to them before showering them in kisses. This loyal and devoted boy has so much to offer and it breaks our hearts that he spends his days waiting for this moment to come each week. Perhaps the ideal scenario for Noodles would be to find a second foster home in where he could spend his days during the week but still get to see his other family during the weekends.

Noodles has shown himself to be nothing but the perfect gentleman in a home environment; he is spotlessly clean, well behaved and fine with visitors if they are introduced to him initially. He is impeccably well behaved on the lead and even though he is now well within his senior years he still thoroughly enjoys his walks. He tends to ignore most dogs but has sadly been attacked by several dogs over the years - none of which he was the instigator! Therefore he may be wary of some dogs and may snap if they do not give him space. We feel that Noodles should be the only pet in the household as he does prefer his own space. He has never been around cats.

Noodles has been diagnosed with a Thyroid issue and currently requires medication which he will need for the rest of his life. In addition to this he has suffered with Bloat in the past and is currently being fed on a special diet of Royal Canin Gastro Intestinal in which he has 3 small meals throughout the day fed on a raised feeding stand. He cannot be given any human food or treats. He also needs Vitamin B12 tablets and although his skin is generally okay, during in the summer months he may need to be bathed with a medicated shampoo.

For poor Noodles, his only problem is his separation anxiety as he so desperately wants to be with people that he will fret until his owners return and for this reason we are looking for a home where there will be someone around most/all of the time to keep him company and build him up slowly to being left alone. Now that Noodles is much older we are sure that once he feels safe in a home where he knows he truly belongs this issue may settle. Noodles has never been around young children so he will need an adult only home free from young children visiting and without any children planned for the future.

Noodles new family will need to make several trips to and from the rescue in order to form a bond with him before adoption. This will then progress into a slow introduction into the home so please do bare your location in mind should you wish to inquire about him.

Noodles will make a fantastic, loyal companion for someone, he just needs some time to gain trust then will show off what a sweet boy he really is.  He would benefit from a home with previous experience of this breed. Please give Noodles a chance!

PLEASE NOTE THAT WE WILL CONSIDER FULL/PART TIME FOSTER FOR NOODLES WHERE ALL FOOD AND VET BILLS WILL BE COVERED FOR THE REST OF HIS LIFE. PLEASE CALL US FOR MORE INFORMATION ON 0151 931 1604. 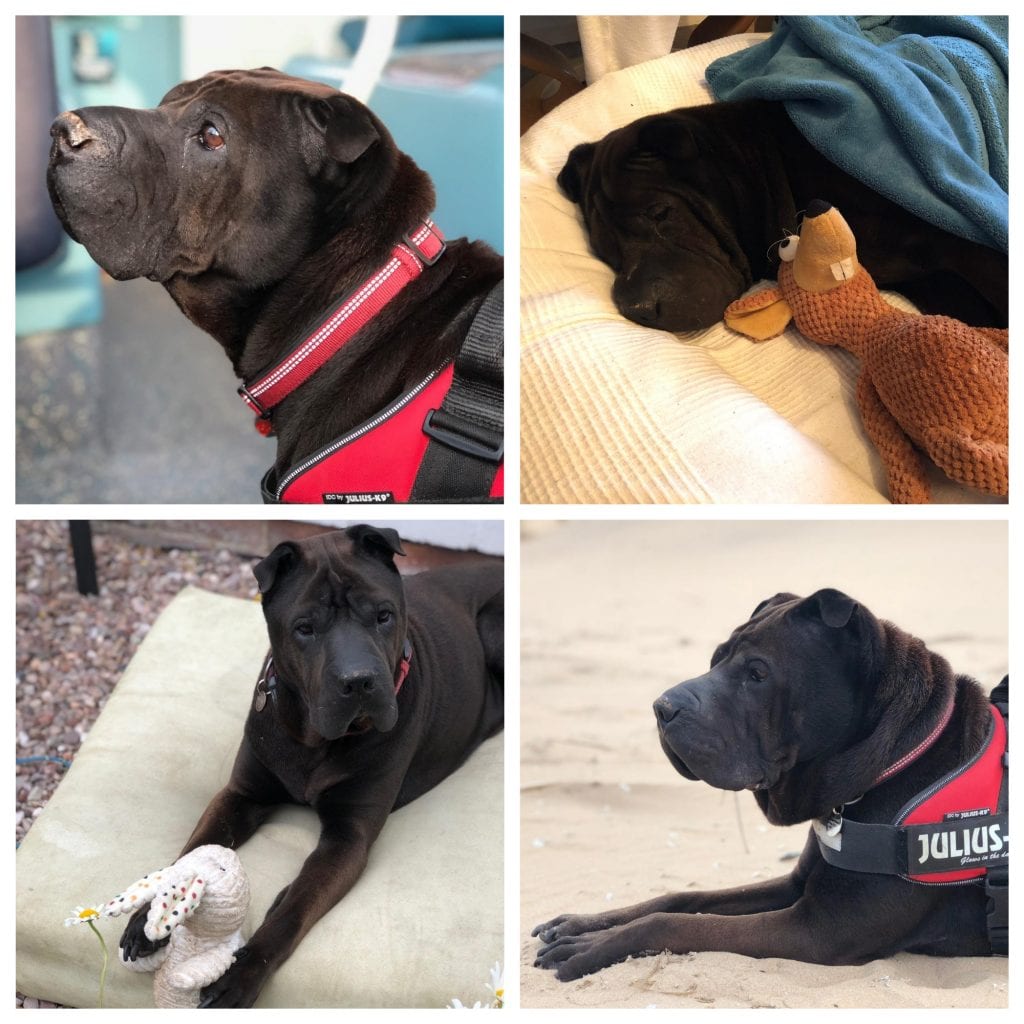 'When Noodles came to live with us we were overjoyed- he was perfect: playful, full of character and very affectionate. We knew that separation anxiety was an issue but Freshfields were very helpful and supportive- even giving us the services of a behaviourist. However as we came to the end of the school holidays it became clear that the issue wasn't going to get better and when Leo returned to work it was upsetting for everyone.

Things came to head when we returned home to find that Noodles has chewed on the baby gate that was put up to stop him hurting himself when chewing on the door. It was clear that Noodles had been very distressed on his own and there was blood on the floor where he had obviously hurt himself whilst chewing on the gate- cutting his gums. We were very upset when we took Noodles back (although he didn't seem bothered - happy to prance off with his friends from the centre). However, a week later we were called by Collette and given an unexpected option - would we like to keep in touch with Noodles- be his walkers and maybe if everyone (especially Noodles) was happy, for him to stay over weekends. We immediately said yes, although admittedly I was initially worried that I wouldn't be able to emotionally deal with continually saying goodbye to Noodles. This has proved to not be a problem because of Noodles great character-getting to see him so happy and the fact that he seems as happy to return to his kennel as he is to come home with us.

Noodles now comes home with us every weekend, now whilst this is lovely for us, as we adore him, we do this to help Noodles. Prior to him coming to live with us, the staff admitted that they didn't know too much about Noodles. What they did know was he was anxious around strangers, not great with other dogs and he wouldn't leave the centre to go for walks with many people.

However, upon his return we were able to say that Noodles was gregarious- he loves to meet new people (to the level of dragging you over to see them), he is good with dogs (unless he meets a black lab!) and seems to really want to be social but to struggle knowing what to do with other dogs  (which can sometimes cause some problems- as other dogs don't know what to make of him). He is playful- he loves his toys and was so affectionate and loving! Having Noodles come and live in a home environment over the weekend gives the staff more information to help them re-home Noodles, but it also keeps Noodles socialised and keeps his anxiety levels down. It also gives Noodles respite from kennel life, obviously there are times when the centre can be loud with a lot of barking and Noodles is a dog who loves his sleep...he really likes his sleep; some weekends it seems that's all he does!!!  So coming to a quiet home lets him relax and get some much needed rest.

Having Noodles come and live with us gets him used to meeting new people (our families love him) and to being in everyday situations- for instance going out in the car, going on days out, and (Noodles favourite) going to the pub (The Freshfield Pub is Noodles favorite as he gets tonnes of attention). Noodles is very relaxed when out and about- in fact in the pub he gets himself into the most awkward position - right in the way of where people will walk- and then goes asleep.

As a result of coming home with us, Noodles is now more active- and wants to go on long walks- instead of his usual mini walks and gives him experiences that he unfortunately can't get in the kennels.

This arrangement has proved to be positive for all involved, as on top of he above it also takes a bit of strain off the staff at the centre, having one of the dogs off site a few days allows them to give the others more attention. We would thoroughly recommend volunteering to bring a Freshfield's dog home on the weekend. Being able to help in this way has enriched our lives and given us an opportunity we did not even know was available. We would like to say a big 'thank you' to all the staff at Freshfields who allow us to do this and who support us and also to encourage others to contact the centre and see if you can help as we do- just think of the benefits you could bring to the life of a wonderful dog... And he benefits they could beg to your life, even if it is just for the weekend.'