Ballerina shares the same origins as her pal, Roland. Both were rescued from a farm where they were no longer wanted; their young lives having been deemed uneconomical. Currently in their second stay at Freshfields, we treasure every day with them.

Regularly referred to simply as ‘The Princess’, Ballerina is as pretty as her name suggests though not quite as graceful. There are so many sides to her wonderful personality. She’ll make a racket at breakfast time in anticipation of food, rake her dirty feet down the backs of your leg when hungry and feeling neglected, jump on you and plunge herself head first into full buckets of feed as you attempt to carry them and generally toss her weight around a bit from time to time but she’ll also burst into adorable joyous displays of playful bouncing, can be extremely serene and gentle, and will regularly seek people out for a good head scratch and fuss, sometimes burying her head into you for a big woolly cuddle.

Rehoming sheep can be a difficult thing to do as they have such strong social tendencies that need to be respected (and we’d miss them terribly) but certainly we would never allow Ballerina to go to new safe pastures without the company of Roland.

Please consider sponsoring Ballerina to ensure that she gets the continued care that she deserves. For other ways to help please see the ‘Get Involved’ section of the website or consider donating feed via a farm feed shop or our amazon wishlist. Donations of fruit and vegetables are also very welcome. 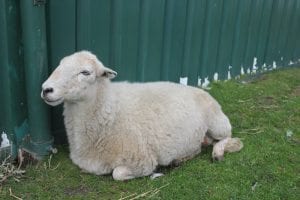